One Third of Smart Device Owners Struggle To Use Them: Report 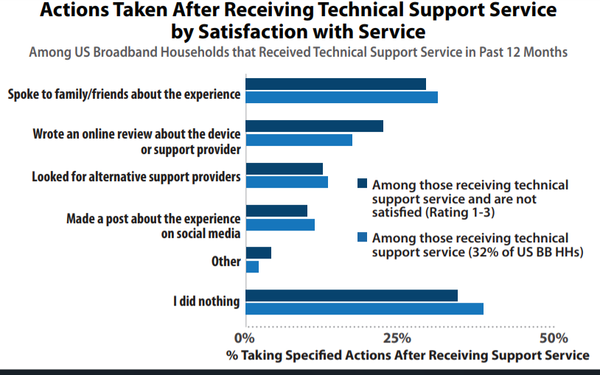 Nothing comes easy. A new report from Parks Associates says the rise of connected devices increases the chances of technical problems, leading to poor product performances, and consumer disappointment. Asking Alexa or Siri for help doesn’t work if consumers can’t get them to work.

The Parks whitepaper, titled "Next-Generation Support: Building an Engagement Platform," says over 33% of consumer electronic device owners reported experiencing problems with their devices over the past year.

By device, 24% said they had at least one problem installing a smart door lock, while 19% had issues with a smart video doorbell, the two devices named most. "Networked” cameras, smart smoke detectors and smart light bulbs averaged at least two problems each, but with fewer people reporting them.

Parks takes the glass-half-full attitude, suggesting that such problems provide manufacturers with the opportunity to launch new “support strategies that can secure new business and loyal customers.”

According to the report, some consumer problems, are not necessarily the fault of one device. It could be the fault of another technology in the home.

“For example, a smart lock may require the lock hardware to communicate with a home WiFi network, connect to home broadband, and ultimately an authentication server in the cloud,” writes Patrice Samuels, the Parks senior analyst who authored the report.  “There are multiple unrelated opportunities for failure.”

She notes, “The rise in the number of connected devices in homes increases the burden on home networks and the likelihood that consumers will encounter lapses in device connectivity.”

And because these are relatively new devices, “this lack of familiarity also increases the likelihood and frequency of user-error as well as remorse returns.”

That can be disastrous. Parks says 29% of consumers who had difficulty using a particular brand switch to another. If that difficulty reaches the “very difficult” threshold, that percentage rises to 49%.

And 13% of consumers won’t even attempt to acquire some smart devices, sure they won’t know how to make them work. Smart devices, in short, make them feel stupid.

And for those who struggle, seeking help from device providers doesn't always work. “Only 47% of U.S. broadband households that received technical support services over the past 12 months are very satisfied with the speed at which their problem was resolved and the resources available to the agent to address their concern,” according to the report.

When they’re not satisfied, though, frustrated users are very likely to post snarky comments on social media, give bad online reviews, or bad-mouth the brand to their friends and family.

Just over 50% of consumer tech problems are also solved by consumers without any professional help. Obviously it's the just under 50% group that's more problematic.

Some new self-help diagnostic tools are built into devices and can be aided by voice assistants. And newer support solutions include various ways technicians can take over a device rather than struggling to get a consumer to explain it, or even using video streaming to help understand and solve the problem..

One interesting solution the Parks report mentions is initiating  “same day /in-home onboarding” that guides consumers through the purchase, setup, and initial usage for their devices literally right out of the box.

Providing such services lead to “better product engagement” and “increases consumer confidence in adopting new technology,” according to the Parks report.