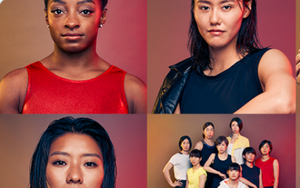 The Olympic games are supposed to be a place athletes compete on strength, speed and grit — not on looks. So Procter & Gamble’s skincare brand SK-II, acknowledging that it’s been part of the problem, is launching a campaign it hopes takes the toxic beauty sniping out of the games, calling the effort #nocompetition.

As marketers get ready to roll out an expected $5.94 billion in Olympic marketing, this campaign hopes to get attention with stirring ads that focus on the way women Olympians are relentlessly judged on their physical appearance rather than simply their athletic performance.

U.S. gymnast Simone Biles, one of the featured athletes and a fixture in many P&G ads, kicked off the campaign with an earnest social-media post: “I’ve learned to put on a strong front and let most of it slide,” she writes. “But I’d be lying if I told you that what people say about my arms, my legs, my body … of how I look in a leotard, bathing suit or even casual pants hasn’t gotten me down at times.”

Besides appearing in print and video ads, the athletes are pushing out messages on their extensive social-media networks, encouraging others to stop the toxic beauty messages. Encouraging people to share the #nocompetition hashtag, ads ask, “When did beauty become a competition?”

In unveiling the effort, SK-II acknowledges that beauty brands themselves share some of the blame.

"Competition in beauty has always been present. But it is impossible to ignore how unhealthy it has become these days, fueled by culture, media, society... and beauty brands like ours! We all have a part to play,” says Sandeep Seth, CEO, Global SK-II, in its release. “As a beauty brand, our role is to help build confidence and spread positivity and not create pressure and toxicity."

SK-II, P&G’s high-end beauty brand, has been posting double-digit sales growth recently and has a strong following in Asia as well as the U.S.

WARC, the international marketing intelligence service, is predicting an Olympic onslaught. It estimates that of the $5.94 billion in marketing likely to be spent in the coming Olympic cycle, $1.95 billion will come from worldwide Olympic partners such as Coca-Cola and P&G, an amount it says is double that of the last Olympics.