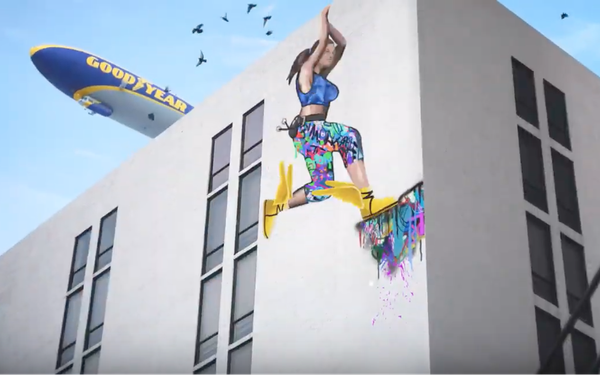 Goodyear is debuting a brand campaign that champions its 120-year commitment to the power of forward movement.

The 30-second TV spot “Breakout” will debut during the Fox broadcast of the Daytona 500 on Feb. 16.

Set to a cover of Steppenwolf’s “Magic Carpet Ride,” the spot follows the journey of a graffiti character who acquires Goodyear “Wingfoot” from a passing Goodyear tire, giving it the power to move and evolve throughout the city.

Goodyear last introduced a brand campaign in 2011 with the theme “More Driven.”  It captured Goodyear’s values to work harder, persevere relentlessly and innovate further, says Todd Macsuga, Goodyear’s general manager of brand marketing. The new creative is an evolution of that work and the tagline will remain the same.

"We are evolving from talking about what a tire does, to what a tire enables you to do,"  Macsuga tells Marketing Daily.

The new campaign is intended to build on Goodyear’s commitment to advancing mobility and helping people discover their potential, he says.

“We want to inspire people to meet challenges, realize opportunities and unleash new possibilities through the power of forward movement," he adds. "The campaign highlights that important relationship between physical movement and unlocking human potential.”

The spot will also air on NBC, ABC and ESPN, and it will be distributed across social media through Goodyear’s social channels. In addition to “Breakout,” Goodyear will introduce another TV commercial later this year, providing yet another chapter in Goodyear’s story of pursuing forward movement, he says.

“We will have marketing that addresses our core collaborations in football, racing and NBA, as well as executions that specifically highlight our new products,” Macsuga says.