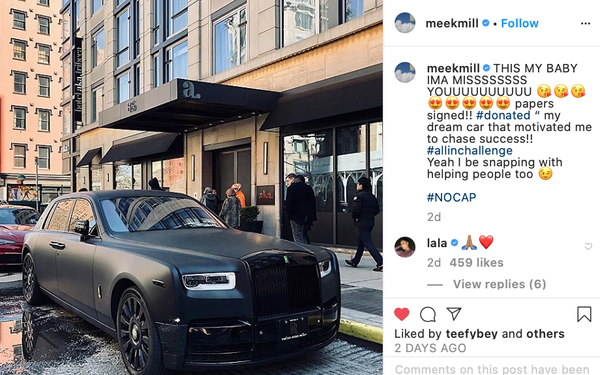 A slew of brands, musicians, actors and athletes are coming together for the All-In Challenge to raise money to fight food insecurity, which has become especially pronounced during the pandemic.

All the money raised will be donated to Meals On Wheels, No Kid Hungry, America’s Food Fund, World Central Kitchen and Feeding America.  As of Friday afternoon, more than $7.4 million ad been raised in bids for auction items.

Each day, athletes, teams, leagues, celebrities, musicians and business moguls will "challenge" each other to up the ante and provide prized possessions and once-in-a-lifetime experiences for fans to bid on.

Donations include rapper Meek Mill’s 2018 Rolls-Royce Phantom; a flight on rapper Drake’s private Boeing 767 and tickets to one of his shows; a round of golf at Pebble Beach with musician Justin Timberlake and actor Bill Murray; co-hosting "The Ellen DeGeneres Show"; a walk-on role in a Martin Scorsese film with actors Leo DiCaprio and Robert De Niro; and golf and dinner with NFL football legend Peyton Manning.

More than 90 auctions are currently available, which celebrities are promoting on their social media accounts with photos and videos.

“Food insecurity is a mounting issue but never more important than during COVID-19 and the unprecedented shortage of food resources our nation is facing,” according to the organizers. “Among those most in need: students who rely on currently closed schools for several of their meals each week; the newly unemployed who are facing uncertain circumstances; and a vulnerable elderly population sequestered in their homes without access to food.”

The fundraiser was created and built by Fanatics founder and executive chairman Michael Rubin, along with entrepreneur Alan Tisch and communications strategist Gary Vaynerchuk.

The event began April 14 and will run until it meets the goal of ‘“tens of millions of dollars for COVID-19 relief efforts.”