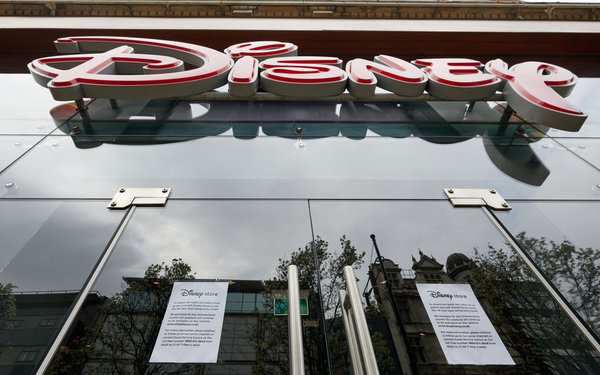 Walt Disney’s business expectations -- especially from its theme parks and sports TV programming -- are now expected to limp along until the end of the year, with profitability sharply declining, according to a report from UBS.

The stock market research company estimates net earnings will sink to $2.9 billion for its fiscal-year 2020 results -- down from $9.6 billion a year ago -- due to the effects of COVID-19.

The lack of sports TV programming will continue to steepen Disney’s decline --- as well as all major TV platforms.

For Disney, UBS estimates 28% of all its programming comes from sports TV content, based on Nielsen live program-plus-seven days of time-shifted viewing hours.

This will affect not just advertising revenues, but affiliate fees. John Hodulik, media analyst for UBS, writes that the suspension of NBA season has already been a blow to the company for its networks ESPN and ABC. And there could be more to come -- possibly a delay in the start of the NFL and other football content.

“College football represents almost twice the viewership for the company and we doubt it can continue to collect its high fees from distributors if the college football season is cancelled or delayed until spring,” Hodulik says.

The positive for Disney is that its national TV advertising represents a much smaller piece of overall revenue exposure compared to other major media companies -- which came in at 12% in its 2019 financial results. This compares to anywhere from 29% to 38% for the likes of Fox Corp, ViacomCBS, Discovery and AMC Networks.

“We remain constructive on Disney's ability to create differentiated, high-value content and to monetize that content through traditional and new channels," says Hodulik.
"We remain particularly constructive on the long term outlook for Disney+ and other DTC efforts."