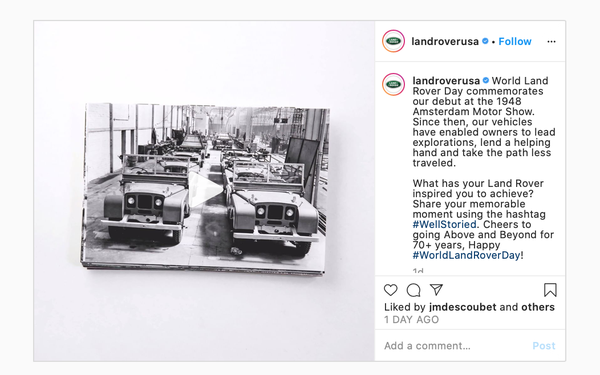 Today is World Land Rover Day, but instead of focusing on the brand’s achievements, the automaker is celebrating those who go above and beyond, especially in response to the pandemic.

It was April 30, 1948 when the Land Rover Series I was unveiled at the Amsterdam Motor Show. That's why every year, April 30 is “World Land Rover Day.”

Working in isolation, Spark44 put together a collection of snapshots from the past 72 years showcasing times when Rover owners have stepped up when it was needed most.

The videos are being shared across Land Rover’s social channels, including Instagram.  Land Rover Global went live earlier today in a similar fashion, noting that today is a day to celebrate those stepping out to save lives.

Rather than celebrate an "inward" milestone, the brand took this day to honor those who have been able to make a difference with Land Rover over the years, says Christopher Barus, Spark44 senior account executive.

“Given the current climate, it was important for us to find a meaningful way to engage Land Rover’s community during this time when everyone is looking for positive moments,” Barus tells Marketing Daily.

In March, Jaguar Land Rover announced it was sending over 160 vehicles all over the globe to support emergency response organizations working to combat the coronavirus pandemic.

Last year the automaker used the day to release teaser images of its new Defender, which is now on sale in the U.S.

Land Rover has also used the campaign to launch programs with brand partners, including the Live with Carnegie Hall series, connecting world-class artists with music lovers.

The brand also teamed up with The Singing Machine to host an online singing challenge. At home, participants can submit videos of themselves doing their best carpool karaoke -- like James Corden in his Range Rover during Carpool Karaoke -- by posting a video and tagging @LandRoverUSA.