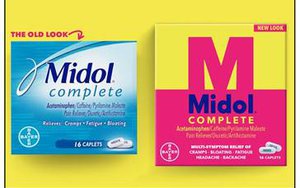 Midol is getting a makeover.

The over-the-counter menstrual pain reliever that dates back to the days when a woman’s period was commonly called “the curse” is now being repackaged in bright colors, featuring an oversized “M” and the bold slogan, “Live Life M-Powered.”

The Bayer-owned brand has been around since 1911 and now competes with other more general pain relief products like Anacin. But for years, as now, it’s advanced the idea that it does more than ordinary pain relievers, like relieving bloating, fatigue and backache.

In the new pitch, Midol’s pitch is more positive--go for it!--rather than a former attitude that seemed more like get-over-it. (An ad from the 1960s  showed a drawing of a distressed woman with the text below reading, “Don’t let periodic pain make a slave of you, Betty. Just take a Midol tablet with a glass of water. . . that’s all.” )

When brands introduce new packaging and logos, they often try to quickly deep-six the old ones. Midol is emphasizing its new modernity by publicizing the old (current) packaging in contrast to the new container, designed by the Cincinnati-based  GoDutch creative consultancy.

The relaunch includes the introduction of an  On-The-Go packets version is aimed at women with active lifestyles.

“Having a deep understanding of who she is and what she is going through has enabled us to reinvent our brand to speak directly to her needs before, during and after her period,”said Lisa Tecklenburg, the vice president and general manager of  Bayer Consumer Health U.S., in a statement. The typical Midol consumer, she says, just “doesn’t have time to be off the grid” during menstruation.

The American Academy of Family Physicians estimates that as many as 20% of women suffer from menstrual cramping so severe it interferes with their daily activities. Midol says the average woman spends 50 days with period-related discomfort, but concedes, most of them do nothing much about it.

In addition, Midol discovered in new research conducted by Wakefield Research that 80% don’t recognize they are experiencing symptoms until they are already having their periods.

That’s when they seek relief rather than take steps (read: take Midol) to relieve cramps and other aches before they really become major pains.

The ad agency Oliver  worked on the new campaign, which, the brand says will include a  “100% national digital media campaign,” and social campaigns complete with influencers, a special Snapchat filter and GIPHYs.