Missed Ad Opportunities Jumped To 46% In Q1, Even As Streaming, VOD Soared 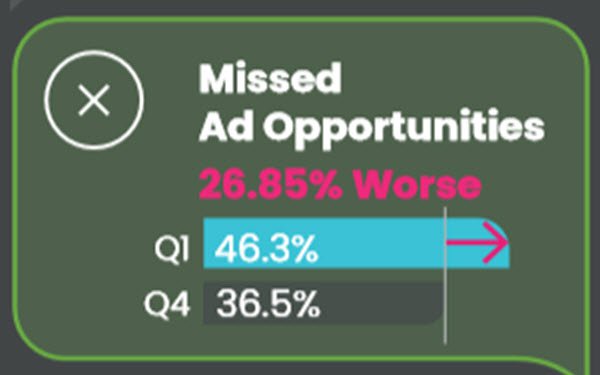 During 2020’s first quarter, time spent on streaming globally leaped 57% year-over-year, driven by a 79% jump in video-on-demand, which captured 72% of total viewing time.

Not surprisingly, the real surge in streaming commenced on March 15, as shelter-at-home orders rolled out in countries and regions around the world.

But advertisers’ massive pullback in response to that phenomenon and to economic uncertainty and content concerns, combined with increased ad-quality errors, drove missed ad opportunities — those not filled or not played as intended — up by 26.9% versus Q4 2019, to reach a full 46.3% of available opportunities.

Those are highlights from Conviva’s global State of Streaming report for the transformational quarter.

The most common issue behind missed opportunities was the lack of ad demand, which led to wrapper and VAST errors as publishers tried to fill ad slots but came up empty, Conviva reports.

Also, viewers who abandoned content when encountering any ad-start delay declined by 5.6% versus Q4. At the same time, the portion who abandoned content when encountering significant ad-start delays (5 seconds) jumped to 19.2% — up from an average of 13.6% found in previous periods analyzed by Conviva. “This illustrates how viewer impatience for ad delays continues to rise,” notes Conviva.

Everything Changed In a Month

Viewing on connected TVs dominated growth during that period: up 21% overall, with a 26% increase in on-demand.

TVs were also the only device to see an increase in live viewing month-over-month — up 10%. Mobile and PC declined by 7% and 10%, respectively.

However, CTV remained the device of choice for streaming, capturing 54% and 62% of all viewing time globally and in the Americas in the quarter.

Regional exceptions were Asia and Africa, where PC viewing captured 51% and 54% of viewing time, respectively; and Europe, where mobile edged out other devices, with a 32% viewing share.

PCs saw moderate YoY quality declines in all categories except buffering, which improved 18%.

Roku was the only device to net quality improvements across the board, with video start failures plunging 49%, 37% higher picture quality, a buffering improvement of 33%, and 15% faster video start times.

The long trend of greater growth for U.S. aggregators than for U.S. publishers reversed in Q1.

Aggregators’ growth was impacted by the closure of PlayStation Vue at the end of January, while the publisher category was bolstered by the recent launches of Disney+ and other services, according to the report.

Data for Conviva’s report is collected primarily from its sensor technology embedded in 3 billion streaming video applications, which measure more than 500 million unique viewers and 150 billion streams per year and 1.5 trillion real-time transactions per day across more than 180 countries. Year-over-year comparisons were normalized at the customer level for accurate representations of industry growth. The advertising data are based on an analysis of 12.5 billion ad attempts in Q1. The social media data are based on an analysis of more than 15 million posts, 1.7 million videos, and 2.9 billion engagements across Facebook, YouTube, Twitter, Instagram and TikTok.