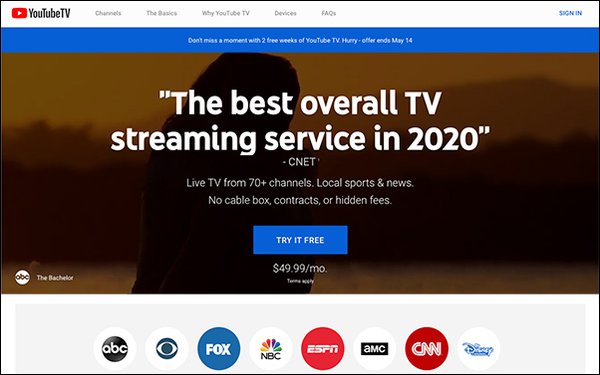 Despite an expected sharp decline in advertising revenues -- 20% in the first quarter -- ViacomCBS surprisingly added YouTube TV to its list of virtual pay TV providers -- for the 14 cable networks formerly associated with Viacom.

“This brings ViacomCBS closer to an equivalent distribution footprint as its peers, although it is still less represented on or absent from some important services, notably Hulu Live,” says Todd Juenger, media analyst of Bernstein Research.

He added: “We certainly expect this unexpected news to reset the stock at a new, higher level.” ViacomCBS’s stock was up 14% to $16.95 in mid-day Thursday trading.

With the growth of virtual pay TV providers, many cable-only TV networks groups could initially only get deals with so-called “skinny bundles” of TV networks -- less expensive services that mostly did not include big TV broadcast networks, ones with expensive sports programming.

Viacom and CBS closed the re-merger in December 2019. The two companies separated in 2006.

Looking at Viacom’s quarterly results, overall advertising was down 19% to $2.5 billion due to the absence of results from Super Bowl and the NCAA Men’s Basketball Tournament -- both which aired in 2019, but not in 2020.

The NCAA event was cancelled due to COVID-19 issues. Taking those events out, core advertising was up 2% for the period.

Looking at just the CBS Television Network, advertising revenue was down 30% to $1.4 billion due to the cancellation of the NCAA tournament. At the same time, affiliate revenue grew 20% to $734 million as a result of station affiliation fees, retransmission revenues, and subscription streaming revenue.

Viacom says revenues from U.S. domestic streaming and digital video business -- which includes its CBS All Access, and the Pluto TV streaming platform -- grew 51% to $471 million.