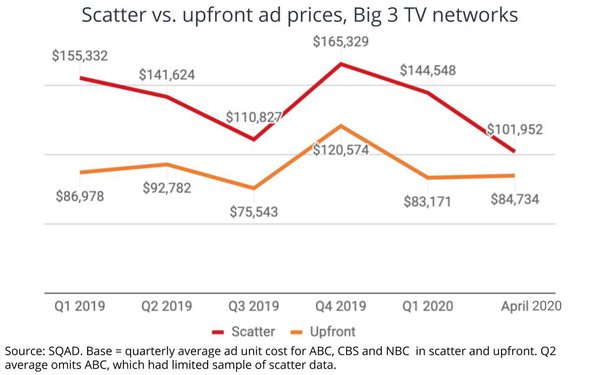 In another sign of weakening ad demand -- and a troubling indicator for 2020-21 upfront network TV ad negotiations -- the delta between upfront and scatter ad prices narrowed to its closest point in recent memory in April, according to a Media Daily News analysis of data from SQAD.

With just $17,218 separating the average scatter ad unit price from that of what advertisers bought in the upfront, April's ad pricing removes one of the major arguments for buying network TV ad time upfront: price protection.

The data, coming as advertisers and media buyers are poised to exercise third-quarter upfront cancellation options, is another negative signal of plummeting demand heading into the annual upfront ad marketplace, which many now believe could be pushed back to the fourth quarter and drawn out as advertisers and agencies try to get a handle on their own budget forecasting for the year ahead.

"All three networks saw double-digit declines in scatter from the first quarter into April 2020," SQAD noted in a report provided to MDN, adding: "Changes in the upfront ad values are consistent with seasonal trends."

Historically, ad demand spikes in the fourth quarter heading into the annual holiday shopping season and ebbs somewhat in the first quarter of each year, although the third quarter typically has the weakest overall demand.

SQAD, which derives its data from estimates provided from reporting media buyers, said it will publish additional estimates on the volatility of the second quarter 2020 marketplace once it has tabulated May and June data.