Transactional VOD Use Up Significantly In Q1

NBCUniversal and other entertainment giants are looking to establish new premium video-on-demand business models — and making waves by challenging the traditional theatrical release window in the process, in some cases.

Some new data from Parks Associates offers more context as to the opportunities behind this push.

In this year’s first quarter, 14% of U.S. households with broadband reported using transactional video-on-demand (TVOD) within the past 30 days — up by 5 percentage points from the previous year, according to the research and consulting firm’s OTT Video Market Tracker.

The limited-time VOD rental or purchase model is offered by a growing number of aggregation services, including Amazon Prime Video, FandangoNow, Vudu and Roku — which confirmed that TVOD, as well as SVOD trials and subscriptions, rose in Q1 — as well as available directly through some studios' own streamers, like Disney+.

In addition to actually debuting “Trolls: World Tour” via TVOD, Universal Pictures released “The Invisible Man,” “Emma” and “The Hunt” to home video earlier than planned due to theaters’ closure and increased streaming during the pandemic’s shelter-at-home scenario. Similarly, Disney released “Frozen 2” three months before its originally planned release date.

“Many steps in content windowing were narrowing already, but the current shelter-in-place orders pushed the digital distribution of new theatrical content to the front to offset the lost revenue from closed movie theatres,” notes Parks Associates research director Steve Nason.

The potential loss of revenue if a studio’s films were boycotted by theaters due to release window issues, versus the revenue from large numbers of households paying $20 or more to rent a new film, is of course the major factor that studios must weigh in deciding on release strategies for releases when theaters open again.

But piracy is another not-inconsequential consideration, according to Nason. “By moving more prime content online earlier, studios also increase the risk of piracy for their top-dollar assets,” he warns.

“Early window content has always been a target among pirates, but they’ve had to sneak cameras into theatres and bootleg low-quality recordings. Now, with releases going digital, pirated video will be higher-quality, and consumers might feel emboldened to tap into pirated video since theaters are closed. This will put more pressure on the anti-piracy efforts among video content and service providers.”

Parks’ research showed that use of pirated content is already nearly on par with freemium content, TVOD and watching a previously purchased video in terms of reported OTT usage habits in the past 30 days. OTT subscriptions, advertising and TV everywhere, in that order, were the most-cited OTT uses during that timeframe: 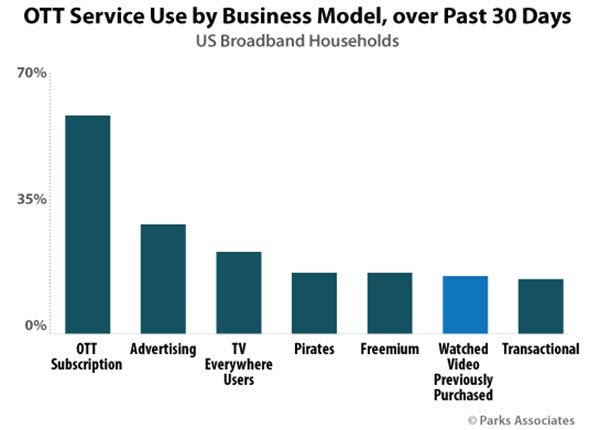