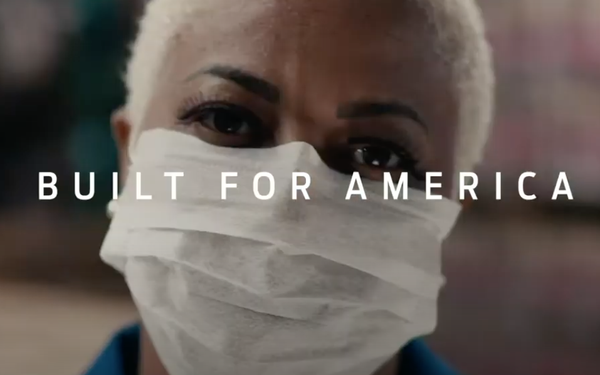 Ford Motor Co. is launching a campaign that celebrates American manufacturing, including the flexibility of workers to switch from making vehicles to medical equipment during the pandemic.

The effort includes social media and three TV spots from Wieden + Kennedy with voiceover by Bryan Cranston, who has been used in Ford ads since the “Built Ford Proud” campaign, which launched in 2018.

The spots will run in network prime, morning/evening news, cable sports, entertainment and during FOX NASCAR, which returns Sunday. In addition to TV, spots will run via streaming/CTV, digital and social, according to a Ford spokesperson.

The creative comes at a time when automakers are making moves to restart manufacturing as states begin to ease their shelter-in-place mandates.

Ford claims to employ more hourly workers in the U.S. and assemble more vehicles in America than any other automaker. The campaign emphasizes Ford is ready to lead the way to safely restart U.S. manufacturing, starting Monday.

“The next phase of communications is about recovery,” VanDyke says in a release. “We’re looking toward the future and staying committed to our customers — what they want, what they need — each step of the way.”

The campaign underscores how Ford’s workforce quickly shifted gears to develop medical supplies during the pandemic and now is gearing up for a phased restart of manufacturing beginning next week.

An estimated 10 million workers in America are employed by automakers, suppliers, dealers and related businesses, according to Ford. Vehicle sales and service, plus incomes and government revenue, generate $953 billion annually in the country, per the automaker.