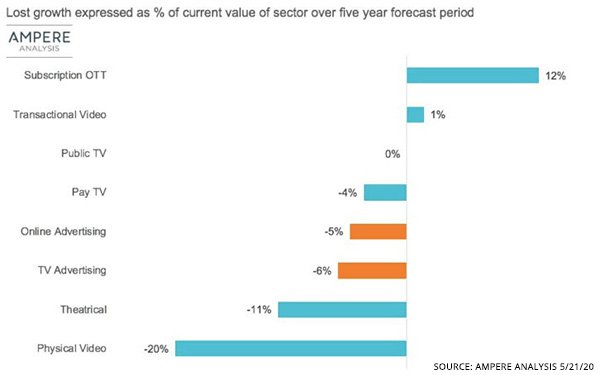 Global TV advertising revenue will lose 6% of its expected growth due to COVID-19 over the next five years, with total global online entertainment advertising pulling back by 5%, according to Ampere Analysis.

The market-leading data and analytics firm says the worldwide TV and online entertainment advertising market will be the hardest-hit over the next two years --  down $40 billion in growth in 2020, and $43 billion in 2021.

In a pre-COVID-19 estimate, Statista said global TV advertising totaled $166.3 billion for 2019 and is estimated to grow to $177.7 billion by 2023. Annually, U.S. TV advertising revenue is at around $70 billion, according to a number of projections.

In addition, Ampere says, theatrical revenue will sink $24.4 billion over the next five years -- with revenue growth down more than 11% from previous estimates.

At the same time, it says, global subscription fees -- from premium streaming services -- now look to increase their rate of growth through 2025 and will gain 12% from previous Ampere estimates.

For 2019, the Motion Picture Association said worldwide box-office receipts were at $42.2 billion, with the U.S./Canada at $11.4 billion of that total.

Global home/mobile entertainment -- including streaming, but excluding pay TV subscriptions -- amounted to $58.8 billion and totaled $25.2 billion for the U.S. and Canada.

Statista says the total value of the global entertainment business was $2.3 billion in 2019.