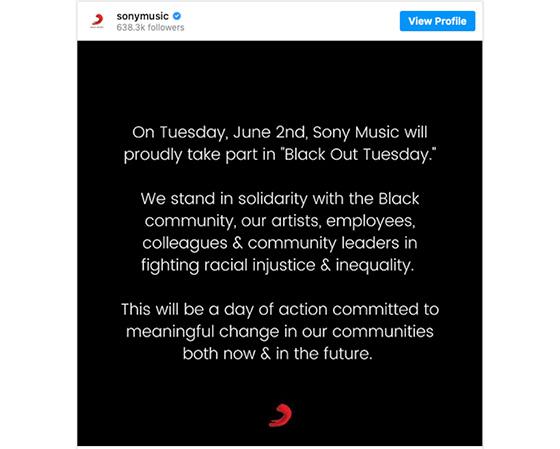 Media companies, platforms and social-media users alike have paused content on Tuesday to take part in the "BlackoutTuesday" initiative and show support for the black community.

Protests have erupted nationwide after the death of George Floyd at the hands of Minneapolis police on May 25.

The Blackout Tuesday movement was started by music executives Jamila Thomas and Brianna Agyemang, though they used the hashtag "#TheShowMustBePaused."

They called for Tuesday, June 2, to be a day to pause all business and take a stand against the “longstanding racism and inequality that exists from the boardroom to the boulevard. It is a day to take a beat for an honest, reflective and productive conversation about what actions we need to collectively take to support the Black community,” they wrote. "We will not continue to conduct business as usual without regard for Black lives."

Chris McCarthy, president of ViacomCBS Entertainment & Youth Brands, told employees the company will not hold any meetings or conduct any business today.

“We will stand in solidarity with our African American colleagues and loved ones across the country," he wrote in an internal memo obtained by CNN.

On Monday, ViacomCBS networks (including MTV, Comedy Central, Paramount Network and Pop) went dark for 8 minutes and 46 seconds in honor of Floyd, the Black Lives Matter movement "and other victims of racism," McCarthy wrote.

That is the length of time Floyd was suffocated while under police custody.

BET is airing special programming beginning today “addressing systemic racism, the violence faced by Black people in America and the solutions to help move the country forward,” according to Deadline.

Audio streaming platform Spotify is including an 8-minute, 46-second track of silence on select playlists and podcasts.

At 3 p.m. ET today, SiriusXM will silence all music channels for three minutes.

According to a memo SiriusXM CEO Jim Meyer sent to employees, the pause signifies “one minute to reflect on the terrible history of racism, one minute in observance of this tragic moment in time and one minute to hope for and demand a better future.”

“SiriusXM and Pandora will continue to amplify Black voices by being a space where Black artists showcase their music and talents, and by carrying the message that racism will not be tolerated,” Meyer wrote.

All across social media, users are posting a blank, black square, creating a blackout on users’ feeds.

The movement, however, is not without controversy.

A number of activists and influencers are arguing that the blank images on social media are directing attention away from important information and updates on the protests and the Black Lives Matter movement.