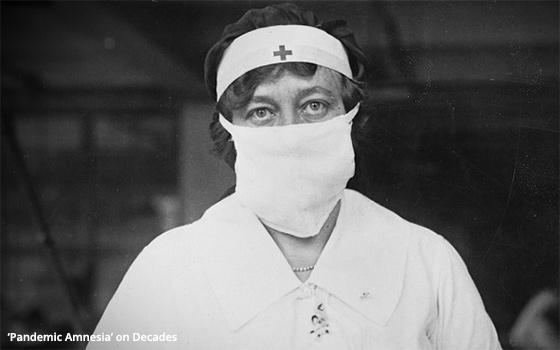 For thousands of American families, it is the pandemic in the attic -- stored away and forgotten along with the keepsakes and fading photos of past generations.

A new documentary explores that very phenomenon -- namely, the striking manner in which Americans who lived through the 1918/1919 flu pandemic tended to avoid talking about it, often concealing it from their children and grandchildren.

This documentary is titled “Pandemic Amnesia: Recovering the Memory of the 1918 Influenza Outbreak.” It premieres Monday night (June 8) at 9 p.m. Eastern on the digital broadcast channel known as the Decades TV Network.

“The pandemic of 1918 and 1919 was the greatest devastation of the 20th century and in all likelihood in the whole of human history,” says one speaker in the documentary, Guy Beiner of Ben-Gurion University of the Negev, in Israel.

And yet, he notes that are “no memorials [and] no great memory sites” dedicated to the millions who died. In fact, historians have no precise fix on the death toll from that pandemic, with estimates ranging widely from 50 million to 100 million deaths around the globe.

The reasons for this mass-forgetting are numerous, and they all get a thorough, concise going-over in this sensational new documentary that runs just 22 minutes in length.

This gem of a documentary is surprising both for its brevity and for the quality of its history and visual storytelling.

The breadth and variety of archival film and still photos that the makers of this documentary managed to cram into this 22-minute film is breathtaking. It is great stuff.

I have been watching documentaries of this sort for most of my life, and none of the film or photos seen in this show are familiar to me at all. In addition, none of the images are repeated in the show.

The result is like looking at a vivid time capsule of the year 1918. To write that a documentary “makes history come alive” is often a resort to hyperbole and cliché, but this documentary actually achieves this elusive goal.

The faces of ordinary people seen in this show are from more than 100 years ago, but they are presented so lovingly and effectively here that they become familiar to us all.

On their faces can be read their feelings: Heartbreak, sadness, loss, joy, redemption and recovery -- just like us. What a time it was. And what an exciting, moving, thought-provoking documentary.

I have been doing this long enough to already know that come next December, this documentary will be at or near the top of my list of the best shows that came my way in 2020.

This documentary is brand-new. The interview segments were all conducted via webcam during the current period of COVID-19 confinement. It was produced and directed by Billy Miossi.

Decades is owned and operated by Chicago-based Weigel Broadcasting.

It is the TV Blog's wish that “Pandemic Amnesia” gets the viewership and recognition that it richly deserves. Everyone involved in the production of this documentary deserves praise and credit for a job very well done.

“Pandemic Amnesia: Recovering the Memory of the 1918 Influenza Outbreak” airs Monday (June 8) at 9 p.m. Eastern on the Decades TV Network.