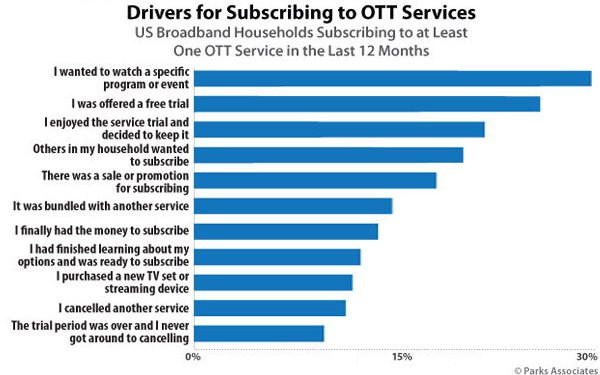 Three-quarters (76%) of U.S. households had OTT video service subscriptions, versus just 62% with traditional pay-TV services, as of the end of March, according to a new analysis from Parks Associates based on a survey of 10,000 U.S. broadband households.

With movie theaters closed and cinematic productions and live events cancelled or postponed due to the pandemic, “services are lacking some high-dollar content at the same time overall video consumption is accelerating,” says Steve Nason, research director, Parks Associates. “OTT services responded by adding new releases and extended free trials. As a result, OTT subscriptions have increased, while the churn has declined slightly since last year.”

“But we will see, as lockdowns ease, if these strategies lead to sustainable growth or if the OTT industry needs to adjust again to new viewing patterns," he adds.

"Trial offers can be successful in attracting new users, but as competition increases and household budgets shrink, providers will need to explore new service models, such as making a portion of content free or offering discounts to longer-commitment subscriptions," Nason asserts.

Among all households that report subscribing to at least one OTT service in the last 12 months, the most-cited reason (nearly 30%) was wanting to watch a specific program, followed by being offered a free trial (chart above).