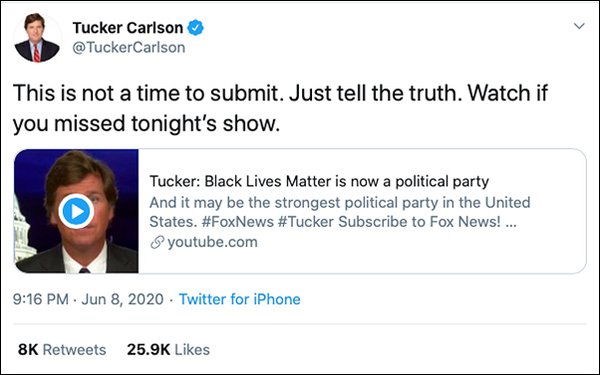 Four TV advertisers are pulling advertising on Fox News Channel’s  “Tucker Carlson Tonight” after controversial remarks about the Black Lives Matter movement and protests in many cities, according to reports.

T-Mobile tweeted: “We haven’t run ads on ‘Tucker Carlson Tonight’ since early May and have cancelled all future placements. We will continue to support those who stand against racial injustice.”

Commercials for Disney’s ABC were placed “without our knowledge by third-party media buyers who were unaware that we do not advertise on the show,” an ABC spokesperson told Deadline.

A Fox News Channel spokesperson told Television News Daily that all national TV media advertising money from those advertiser departures in the "Carlson" show was moved to other Fox news programs.

On Monday, Carlson offered up his opinion on recent protests in dozens of cities against racism and inequality, spurred by the death of George Floyd after a Minneapolis policeman had his knee on Floyd’s neck for almost nine minutes.

Carlson said: "This may be a lot of things, this moment we are living through, but it is definitely not about black lives and remember that when they come for you, and at this rate, they will."

A statement from Fox News Channel to a publication said Carlson's reference to “they” will “come for you” was referring to Democratic leaders and inner city politicians.

Over the last two weeks (May 27 through June 9), major advertisers on Carlson’s show included My Pillow, with 45 airings; Sandals Resorts, with 16; Norton, with 16; Qunol, at 13; Tecovas, with 12; and Visiting Angels, with 10, according to iSpot.tv.

In December 2018, Carlson’s show also lost advertisers after he said immigrants made the U.S. “poorer and dirtier.”