How One Agency Returned To Commercial Shoots 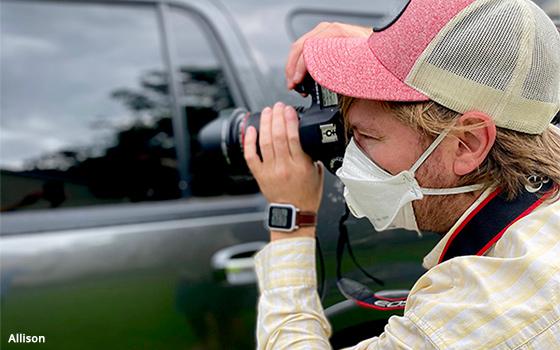 With South Carolina serving as one of the first states to lift lockdown restrictions, Charleston-based Levelwing was able to recently film on-site for a national retail brand.

The experience may prove to be instructive to shops in other locations (including Los Angeles, which restarted production on Friday) on what to expect as the industry attempts to return to normal post-pandemic.

The agency has produced content for almost two decades from the Super Bowl to the World Cup, but “we never really had a shoot quite like this one,” says Mills Allison, creative services director, creative and content studio, Levelwing.

The pitch proposal for the on-site shoot originated in March before the government shut down all nonessential business, but was already story-boarded and finalized. The creative was refined as the pandemic progressed, but after weeks of tightening the logistics down with the brand, the production finally received the go-ahead during the first week of June, Allison explains. Both the client and agency believed they would still be able to shoot the creative while wearing PPE and taking proactive protection measures.

Due to these precautionary measures, the crew was “incredibly lean,” says Allison. “We took the term ‘skeleton crew’ to a whole new level.”

Four of Levelwing’s creative team members were eager to be back in the field, he says. It was “absolutely not” difficult to find willing volunteers. “Everyone was excited to be out producing new content that is imperative for our brands to have as they work back to the road to recovery.“

The entire team took proactive safety measures, wearing protective masks all day long, never shaking anyone’s hand, using their own pens. The team also worked to sanitize anything that more than one person would come in contact with.

The agency says for safety it did not hire any professional actors. Instead, Levelwing’s account director for the client, Christina Hensch, played the “customer” for the day, as well as other roles. “There wasn’t a lot of downtime,” says Allison.  “And yes, all staff there signed waivers.”

The clients themselves were unable to fly in for the shoot, so they conducted “virtual approvals” and stayed in touch via video conference, says Allison. “The brand was fantastic throughout the process and offered one approval contact so that we could stay as efficient as possible in the actual four hours of film time.”

One challenge  was the inability to close the store that served as the location for the shoot or bring in any lighting packages. “It was one of those days where each of the four of us had to play the role of multiple job titles on a normal shoot and everyone stepped up beautifully.”

The crew filmed on-camera talent each with masks on — and with masks off — so that the client has creative options over the next few months depending on societal trends, says Allison. “We captured more than just masks though: gloves on hands, touchless dropoff for customers, enhanced mobile support and booking, call-in payment outdoors, and services without needing to go inside.”

The video assets and select stills from the shoot are currently in post-production. Levelwing hopes to distribute them to other agencies on the brand’s roster so that content can “be leveraged aggressively,” and with “relevance to the reality of the customer’s experience over the summer,” says Allison. “We’re hoping to start rolling out some of the content before the end of the month.”