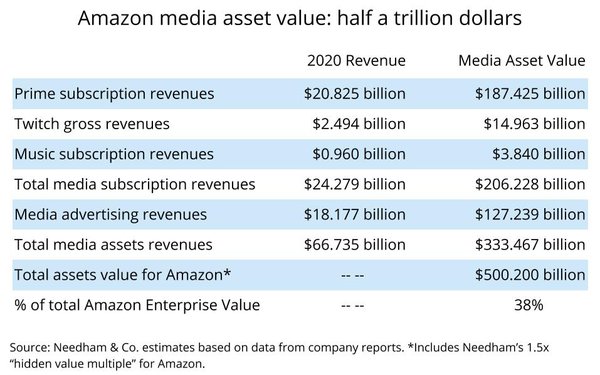 If its media advertising and subscription-based media assets were broken out as a separate business, Amazon's media properties -- Prime, Twitch, Music, etc. -- would be valued as a half-trillion-dollar company, according to an analysis published by the equity research team at Needham & Co.

"Amazon has several important hidden asset values, especially in the media space," writes Needham analyst Laura Martin, adding: "Although we are most excited about advertising as a revenue diversification tool and upside profit driver for Amazon, Twitch is the most undervalued asset inside Amazon's empire (our view) because it extends Amazon’s reach into the next generation of purchasers. Similarly, Amazon Music also extends Amazon's demo reach inside the home."

While it's not surprising that Martin -- who has long been a proponent of eSports emerging as a major industry -- would be keen on the value of Twitch within Amazon, her point about expanding Amazon's demographic composition and reach is interesting from a media strategy point of view.

"Amazon's media strategy supports our view that the company employs a 'land and expand' strategy by entering consumers’ homes through its ecommerce business and subsequently adding services to its consumer-facing bundle," she observes, concluding that the strategy increases the lifetime value of Amazon's consumers by: "1) adding incremental revenue per consumer; 2) elongating engagement and time spent with Amazon brands; 3) lowering churn out of Amazon’s ecosystem; and 4) attracting the next new user at a lower [cost] than most competitors."