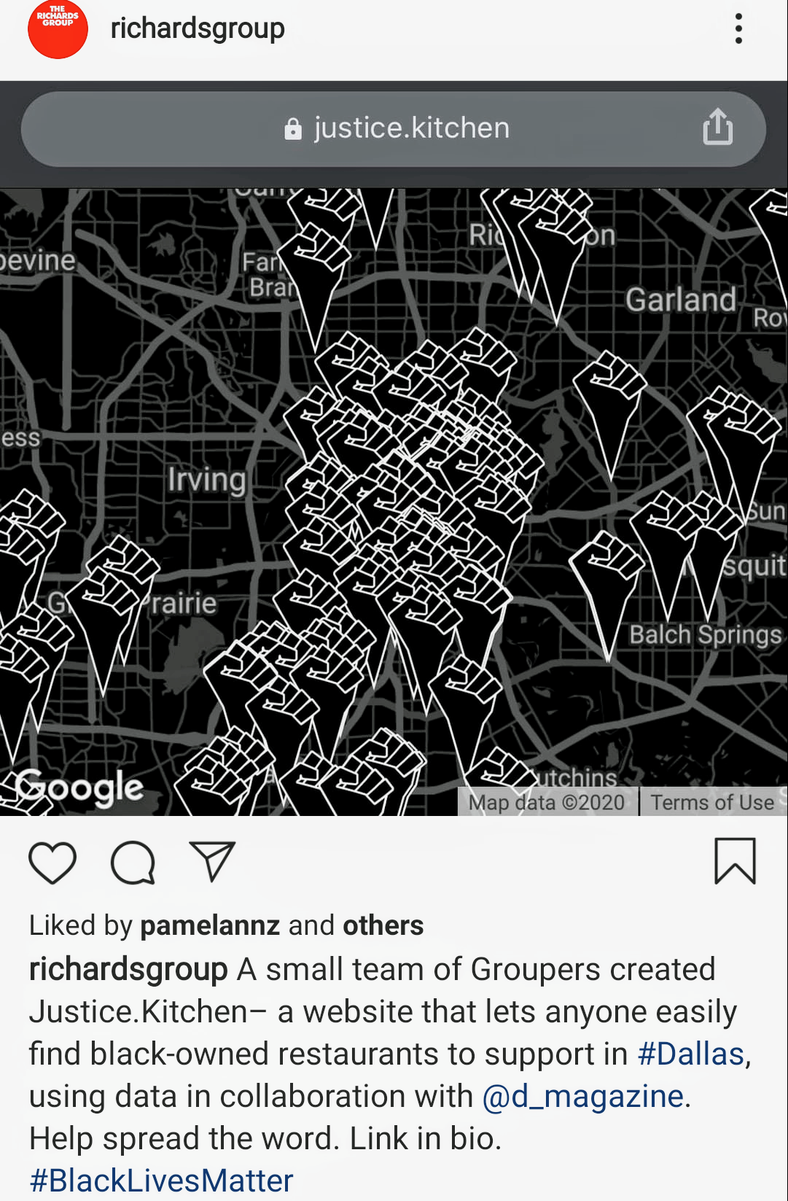 The Richards Groups is hoping to shine a spotlight on black-owned businesses by leveraging its talents and resources to provide an open-source platform designed to easily locate these companies.

The Justice Kitchen website connects people directly to black-owned restaurants in the Dallas metro region, home of the agency. The map is designed to be easily navigated and links directly to restaurants, helping to direct more revenue to the owner. Other platforms like Uber Eats take a cut or force the restaurant to pay a fee to be listed.

The agency specifically designed the product to be free and easily duplicated inviting others to create similar platforms in their cities.

The effort is the brainchild of Chris Ferrel, the agency’s principal overseeing digital who  teamed with digital producer Corey Austin to help to take it from “square one to 100,” says Austin.

The pair had stumbled upon a spreadsheet published by D Magazine's “SideDish" blog that listed all local Black-owned food and drink businesses. As an agency creative, Austin understood this document could benefit the community, but needed to be transformed visually into an easily digestible piece of information.

“There are wonderful resources circulating across social media listing tons of great Black-owned restaurants,” says Austin. “We brought design to these resources, making them clear to understand and easy to act on. If those cues can push people in the right direction, I'll be thrilled.”

His agency coworkers eagerly joined him to transform his dream into reality. They added to the initial spreadsheet with additional contacts accrued through Facebook and their own personal suggestions.

“Once we started, we couldn't put the project down,” says Austin. “In the fight against centuries-old injustice, here was one small problem that we could solve in a weekend.”

The entire project took only five days, with Austin closely working with his Black colleagues on tonal matters. To that end, the team decided to use a fist rather than the typical map pin icon because Black-owned restaurants empower the people who own them and the community that surrounds them, explains Austin. “That's the goal: to help Black people build the power they need to get the justice they deserve.”