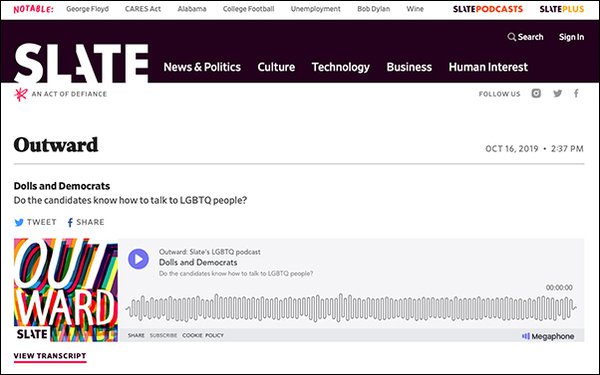 Since most in-person Pride celebrations have been cancelled this year, either due to the COVID-19 pandemic or to show respect for the protests happening across the country, many brands have taken to the virtual sphere to commemorate the month.

Slate has been running a series of LGBTQ+ focused content during Pride month, including special editions of favorite podcasts.

Next Wednesday, the outlet takes to Facebook Live and YouTube Live with an event bringing together the case of primarily Spanish-language comedy “Los Espookys” on Slate’s podcast “Working!” The event features cast members Fred Armison, Julio Torres and Ana Fabrega. The trio will speak with June Thomas about how they execute the show and find the right balance.

Other programming during June includes a special “How To!” focused on a mother named Karin learning how to understand her child’s non-binary identity, as well as deal with her husband, who won’t accept their 22-year-old. Lisa DelCol, a board member of Oklahoma City’s PFLAG chapter, offers advice for Karin.

Monthly podcast “Outward” published two editions for June, one based on an earlier event called Outward Pride Kiki with Bob the Drag Queen. Another episode focuses on ACT UP and Larry Kramer’s legacy and the role of anger in activism. Hosts J. Bryan Lowder, Rumaan Alam, and Christina Cauterucci are joined by "Gentrification of the Mind" author Sarah Schulman.

Finally, podcast “Decoder Ring” explores the origins of the metrosexual through the lenses of trend forecasters and marketers, alongside shows like “Sex and the City” and “Queer Eye for the Straight Guy.”
events, gay/lesbian, online publishing, podcasts, web sites
Next story loading