ATV Nuggets From The NewFronts

As one would expect, there was plenty of advanced TV-oriented content during this week’s Interactive Advertising Bureau virtual NewFronts.

Earlier in the week I highlighted deals and innovations pitched by Roku, Hulu, Tubi and Crackle Plus, and some findings from IAB’s new study of pre- and post-COVID digital video advertising spending. The IAB study confirms that increased investment in CTV has continued through the pandemic, with the money coming primarily from broadcast and cable TV budgets.

Here’s a look at more CTV insights offered during some other presentations this week.

Marketers are understandably caught up in trying to parse the functional and performance differences and overlaps between traditional television and CTV. But a survey for Tremor Video has confirmed the oft-heard anecdotal observation that consumers don’t view their TV-watching experience through that lens.

“Outside our media and marketing bubble, the distinction between linear and connected TV is not nearly so stark as we imagine it to be,” observed Devin Fallon, Tremor’s vice president of media insights and analytics.

Still, two-thirds of those 18 to 54 did say they prefer the convenience of accessing quality content on CTV.

Fallon also touted the importance of being able to retarget consumers through the second screens that so many engage with during TV viewing.

Function-Wise, TV/Video Convergence Has a Long Way to Go

A survey of 500 U.S. consumers conducted for Xandr by Marketcast in April confirms that consumers use a wide range of services to access content on an at-least-daily basis, and that the usage percentages have increased since the pandemic: 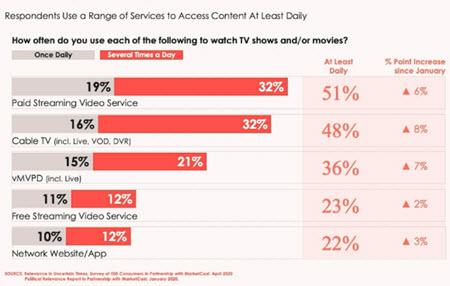 This, combined with the many types of devices and mobile apps in use, and the imminent depreciation of third-party cookies on all major browsers by 2022, adds up to growing fragmentation and increasing complexity in establishing identity for targeting purposes, said Xander Chief Revenue Officer Jason Brown, as part of a pitch for converged roles and use of first-party data-driven identity graphs.

In a separate survey -- this one of 200 digital video advertising buyers conducted for Xandr by Advertiser Perceptions -- 58% reported that TV and digital video planning in their companies or agencies is combined into one team, and 37% said there are separate planning teams, but they work together closely.

But the percentages reporting the same about the buying, execution and campaign reporting functions in their organizations were considerably lower: 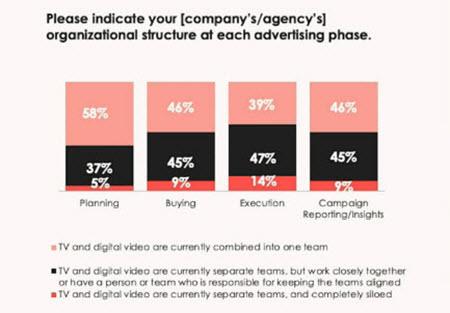 Nearly half of buyers within marketer companies said that the campaign reporting/insights stage is the most challenging to integrate, while agency buyers were most inclined to cite the buying and execution phases:

More than half (52%) of respondents reported that their company or main client is currently working with third-party partners to measure attribution for video campaigns, and another 37% said they’ll be doing so within the next 12 months — a risky scenario, given how the looming phase-out of cookies will impact use of third-party data, argued Brown.

“It is more critical now than ever to build a more holistic understanding of your target audience and control when and how you’re delivering ads, managing exposure and measuring effectiveness,” he said.

CTV Sometimes Drives Higher Lifts On Its Own

TiVo Senior Vice President, Data and Advertising Walt Horstman shared results of a test conducted with a TV entertainment marketer to explore the relationship between linear and CTV campaigns.

The hypothesis was that the highest lift in tune-in for the promoted TV content would occur when CTV and linear were used together.

Together, the two platforms were able to reach 70% of the target audience, with 66.9% reached through linear only, 2.8% through CTV only, and 8.7% reached on both. CTV delivered 10% incremental reach.

The results, however, disproved the hypothesis: Those exposed to CTV only actually had higher rates of conversion, Horstman reported: