Video ad spending as a whole was largely unfazed by dramatic reductions in ad spending following the pandemic’s onset.

The reason: Connected television proved remarkably resilient, as buyers shifted dollars there from broadcast and cable TV, according to a new study conducted by Advertiser Perceptions for the Interactive Advertising Bureau. Some of the study's results were shared on Tuesday, during the NewFronts.

The 2020 Digital Video Advertising Spend Report focuses on helping to put the pandemic’s effects on spending in context.

Advertiser Perceptions conducted online interviews with 350 marketers and agency executives across a variety of brand verticals. All were involved in digital video advertising decision-making, with advertising budgets of at least $1 million in 2019. Half (52%) were senior-level executives (VP or above job title). The research was fielded during two time frames: pre COVID (Feb. 27-March 12) and post COVID (May 1-May 6). 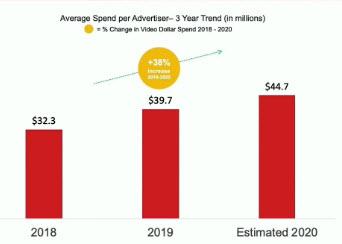 Leading up to the pandemic, CTV had a slight edge in share of spending across devices: 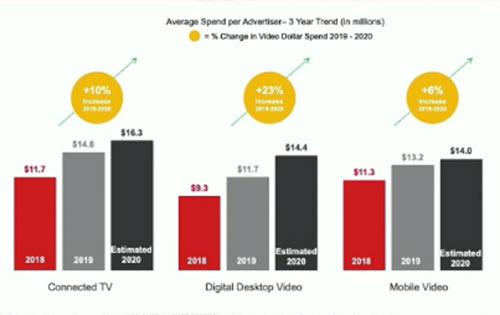 CTV’s average estimated video dollar spend for 2020 pre COVID was plus 10%. Post COVID, that declined by just two percentage points, to plus 8% — putting spending at $16 million per advertiser, on average.

In contrast, digital desktop video has been hardest-hit, dropping from an estimated plus 23% in spending pre COVID to minus 12% post COVID.

Mobile video spend, which had been on a long, strong growth curve, declined from plus 6% to minus 8%. 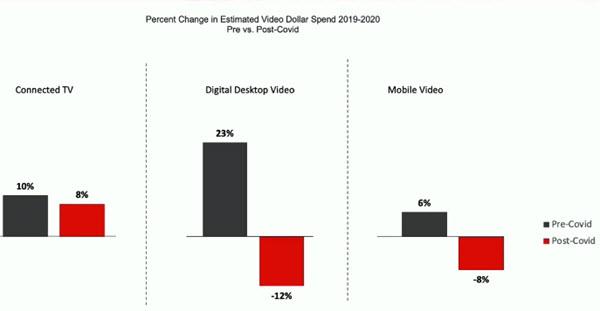 More than half of buyers indicated that they're shifting dollars from broadcast (53%) and cable (52%) to CTV post COVID. 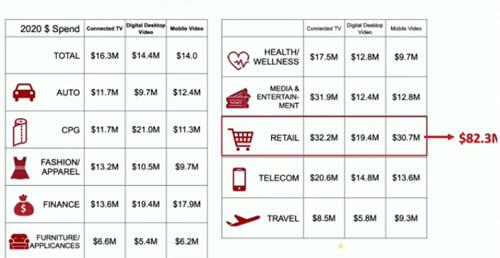 Schauer attributed it to the dramatic shift in consumer video consumption patterns during stay-at-home.

CTV and linear benefited from consumers’ preference for long-form video and large screens during quarantine, she noted. Mobile, meanwhile, saw significant decline for the same reasons.

A less significant factor may have been that CTV is generally purchased alongside linear, she said.

Schauer also said that clients have been more willing to overlook CTV’s measurement challenges during the pandemic, because they’ve largely focused on supportive branding messages that seem to provide more room for going with gut instincts — although they will be returning to a focus on deterministic measurement as the weeks go by, she said.

How does that observation jibe with the IAB report's finding that 64% of buyer respondents gave CTV a high ranking for "clear advertising measurement that proves ROI" -- more than ranked desktop digital video (60%)or mobile video (58%) highly on that attribute?

Asked about that after the session, Roberts said IAB's research "is representative of what we are hearing from the market as a whole. As we know different vertical categories (and even individual clients) have had vastly different responses to the pandemic and the market evolution over the past 3 months. [Schauer's] specific experience is a direct reflection of her particular client responsibilities. As CTV continues to mature, so will measurement and attribution.”

While Q2 was a buyer’s market because of the big pullbacks on spending, Digitas expects a dramatic swing back in spending in Q3, because more brands are now prepared with new messaging. As a result, prices are expected to rise, particularly in the scatter market, Schauer reported.

And it will likely still be difficult to make budget allocation decisions due to some remaining uncertainty about what programming will be available.

That, she said, is likely to benefit non-programming-dependent addressable TV.  “Addressable is somewhat pandemic-proof, because the ads are guaranteed to reach the right person in the type of content they want to watch,” Schauer noted. “Its simplicity is an advantage” in this scenario, she added.