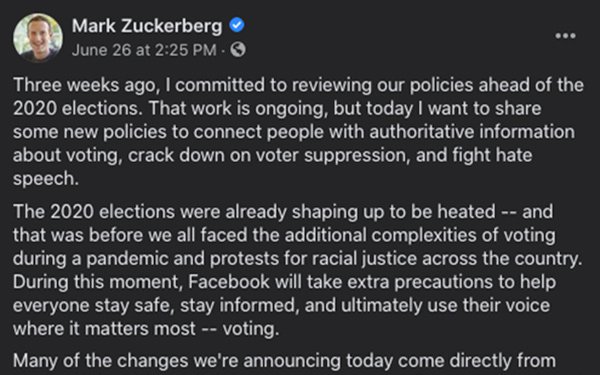 Amid what analysts are calling an unprecedented ad boycott, Facebook has decided to modify its content policies.

Most notably, the social giant will soon begin labeling posts from influential figures that violate its standard content policies.

“Even if a politician or government official says it, if we determine that content may lead to violence or deprive people of their right to vote, we will take that content down,” Zuckerberg declares.

Since then, a growing number of advertisers have joined the #StopHateForProfit campaign, which was launched by the NAACP, the Anti-Defamation League and other civil-rights groups.

Escalating the battle between Madison Avenue and the social-media industry, Unilever said it was suspending all U.S. advertising on Facebook properties (and Twitter) for the rest of the year.

“Specifically, we’re expanding our ads policy to prohibit claims that people from a specific race, ethnicity, national origin, religious affiliation, caste, sexual orientation, gender identity or immigration status are a threat to the physical safety, health or survival of others,” he said.

The policy will also be expanded to better protect immigrants, migrants, refugees and asylum seekers from ads suggesting these groups are “inferior” or expressing contempt, dismissal or disgust directed at them, Zuckerberg added.