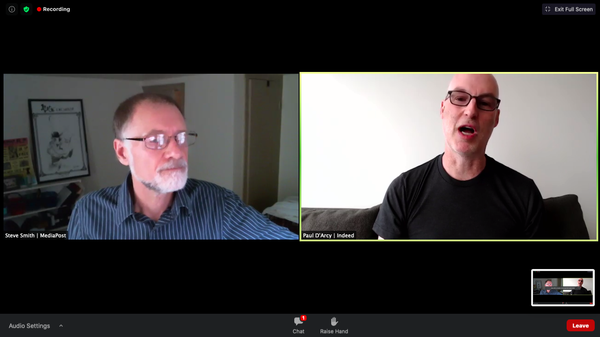 "What we see is that linear TV is the biggest driver for us," he told MediaPost's TV & Video Insider Summit via Zoom, "because of its reach and scale. It's a powerful channel."

Indeed, the world's largest online employment platform, focuses on gaining memory. It wants consumers to think of it when they are looking for a job or are looking to hire someone. It works with people who are experts in media and attention and in finding media that are conducive to that.

"Attention is the key thing," he told our interview, Steve Smith, editorial director of events. "And TV drives twice the attention of YouTube." In fact, he added, YouTube is helpful in extending an existing campaign much as a 15-second ad will remind viewers of a 30-second campaign.

Indeed also finds that the bigger the screen, the better. The more pixels that cover the screen, the longer the picture is remembers. On TV, it decays after 109 days, D'Arcy said. On mobile, it's 66 days. To ensure their path is correct, the brand measures awareness and consideration on a daily basis.

When COVID-19 hit in March, he said, "it was one of most rapid periods of change I've ever seen. There were the biggest changes in human behavior happening in my lifetime in just a few weeks. The only thing that changed in terms of people's activities more than cooking was watching video streaming.

"People were stuck at home. They were consuming much more content." In many marketplaces, advertisers rushed to cancel spend. There was a lot of disruption.

"In March, it was a health crisis first," said D'Arcy. Then it became a jobs crisis in the U.S. There was a freeze on hiring. It impacted us. Job seeker behavior changed. We brought down our media spending, focused on video. Our buys were longer-term buys already in place. We shifted strategy into scatter markets for long-term buys to maintain flexibility."

Indeed has mostly stuck with its buys in place. "But we are continually diversifying beyond linear into other long-form TV formats. We are going toward streaming long-form content. There are good opportunities for that. It's an audience extension strategy."