Automotive TV Spending Down 37% Year-Over-Year In June, But Up From May 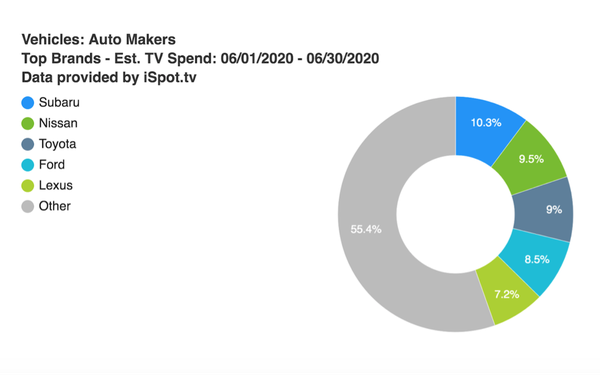 Second-quarter automotive sales were dismal, with the U.S. auto market experiencing its biggest decline since the recession of '09. Clearly, the country is still in the middle of a pandemic.

Concurrently, automakers are spending significantly less on TV advertising. Yes, some businesses are reopening in some markets. But the economy is still extremely fragile, and planned vehicle purchases continue to get pushed back.

Once again, part of this decline comes from a lack of sports programming. Last year, sports-related programming made up about nearly 28% of all impressions for automakers, but in 2020, that figure was just around 8%. Automaker brands are leaning on prime-time impressions at a similar rate to what was seen last June -- just spread out across the week, instead of being concentrated on Sundays (as was previously the case).

For the ads themselves, messaging was focused on a reopening economy and safety precautions for test drives and home vehicle delivery. Panademic-related messaging has been discontinued.

Industrywide, spend was up over 46% month-over-month, and impressions saw a gradual increase over the course of June, led by brands like Lexus and a late-charging Nissan.

"Though automaker spend was still down year over year, June 2020 showed signs of a TV comeback from these advertisers compared to previous months,” Schwartzapfel tells DriveTime. “Along with an industrywide spend increase of nearly 50% compared to May, automakers that weren't big spenders last June appear to be powering the surge.”

Land Rover, BMW, Lincoln and Audi all increased spending by 80% or more compared to the same month last year.

“Given industrywide spend increases as June wore on, there's an optimistic outlook for more of the same in July, especially with live sports set to return,” he says.

It goes without saying that all automakers hope sales will soon follow.