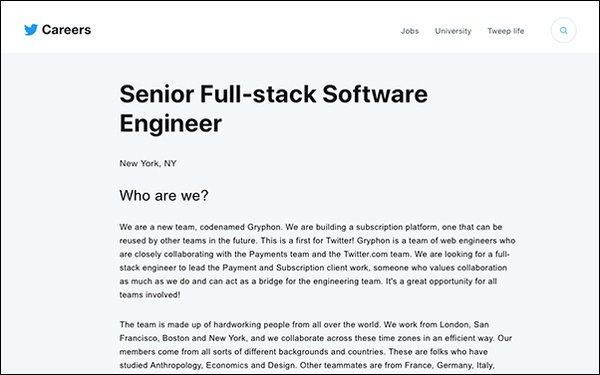 Thanks to a conspicuous new job  posting, Twitter just told the world that it’s developing a “subscription platform.”

Codenamed “Gryphon,” the platform is being created in close collaboration with Twitter’s Payments and Twitter.com team, per the posting.

Of course, no one is expecting Twitter to ditch advertising entirely. For the quarter ended in March, the company’s ad revenue totaled $682 million.

Yet, in theory, the addition of a subscription model could make the company less beholden to the whims of advertisers.

At the moment, Facebook is clearly bearing the brunt of such concerns, yet advertisers could easily turn their negative attention to Twitter.

With the job posting, could Twitter simply be sending a message to advertisers that it has options, and that its platform could be monetized in a number of different ways?

Regardless, the company is in need of additional revenue streams.

Like many online platforms and publishers, Twitter’s ad business is suffering from the pandemic.

During the month of March, it suffered “steep coronavirus-related declines,” in the words of eMarketer senior analyst Jasmine Enberg.

In April, Enberg suggested that the rest of the year would be even more painful for Twitter.

“Twitter’sad business is heavily event-driven, so the suspension of major sporting leagues in March will have hurt its bottom line and will continue to do so as long as social distancing and stay-at-home measures remain in place,” she said. “We’re not likely to see the full effects of the coronavirus on Twitter’s revenues until [the second quarter], but due to rapidly changing conditions, the severity of the impact is hard to predict.”

This past quarter, Twitter also said  it would no longer let users block advertisers from accessing all their personal information. In another possible allusion to the prospect of a paid service, the company even said, “These changes [will] help Twitter to continue operating as a free service.”

Meanwhile, what a Twitter subscription service will look like, what it will cost, and what premium services it will offer remain anyone’s guess.