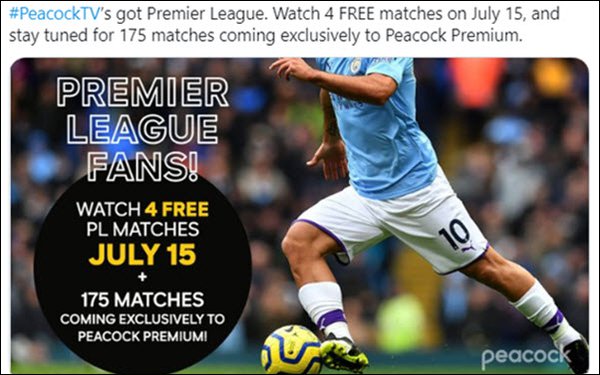 In a last-minute reveal before Peacock’s national rollout next week, Comcast’s NBCUniversal has announced that Peacock will be the exclusive U.S. streaming home for more than 175 of the U.K. Premier League’s 2020-21 season matches.

While most of those games will be viewable only by subscribers to Peacock’s Premium tier, to promote the streamer’s national launch on July 15 and incentivize sign-ups, four of the matches will be open for viewing by all Peacock users on that day. In addition, NBC Sports’ six hours of coverage of the four matches will be presented without ads.

In total, Peacock Premium will present more than 1,500 hours of Premier League live match and shoulder programming, including full-event replays of all 380 matches available on demand (after 9 pm ET) — “the most robust offering ever available in the U.S.,” according to NBCU.

All content currently shown on NBC Sports Gold's Premier League Pass will shift to Peacock Premium with the start of the 2020-21 season.

The Peacock Premium with ads version is already available at no extra cost to Comcast’s Xfinity X1 video and broadband subscribers, and Cox Communications subscribers will have the same free access as of July 15. Both Xfinity and Cox subscribers can opt to pay $5 to access the ad-free version of Peacock Premium.

With the full launch of the free and premium tiers across connected TV, mobile and the web, Peacock Premium — featuring nearly 20,000 hours of movies, shows, and live and on-demand programming — is being offered at $4.99 per month with ads and $9.99 without ads.

The free, ad-supported version is featuring more than 7,500 hours of content.

The Premier League a big get for Peacock, whose headline live-sports offerings will also include the U.S. Open, the U.S. Women’s Open, the Sunday NFL Wild Card playoff game in January 2021, and the Tokyo Summer Olympics and Paralympics now rescheduled for summer 2021.

Just-released results of a survey conducted May 1-4 found, among other things, that one in three U.S. adults said that they were likely to “subscribe” to Peacock when it launches. The poll, from VPN provider ExpressVPN, had was fielded to a demographically representative sample of 1,200 U.S. adults, and had a margin of error of +/- 2.5%.

What Peacock may not have at rollout, however, are distribution deals with Roku or Amazon Fire TV, the two platforms that account for about 70% of the connected TV market, according to eMarketer.

AT&T’s new HBO Max streaming service, which debuted May 27, has to date also not reached agreements with Roku and Amazon.

Although Peacock continues to negotiate with both companies, knowledgeable sources told CNBC, in a piece posted yesterday, that breakthroughs are unlikely before July 15. One put the likelihood at “less than 10%.”

According to those sources, NBCU doesn’t want Peacock to be included in Amazon’s video app store, Amazon Channels — primarily because it wants all users to sign up and watch through the Peacock app or site, so that NBCU has control of first-party user data for advertising targeting purposes.

With Roku, say the sources, a main sticking point is what percentage of Peacock’s advertising inventory Roku will take to sell itself.

NBCU has estimated that Peacock will generate average revenue per user (ARPU) per month of $6 to $7 across its three tiers, and expects to make $5 per month from every user on the service from advertising — “but that $5 per user number could be in jeopardy if NBC gives away its inventory to platforms,” CNBC points out.  (Some sources said Amazon also wants a cut of ad inventory.)