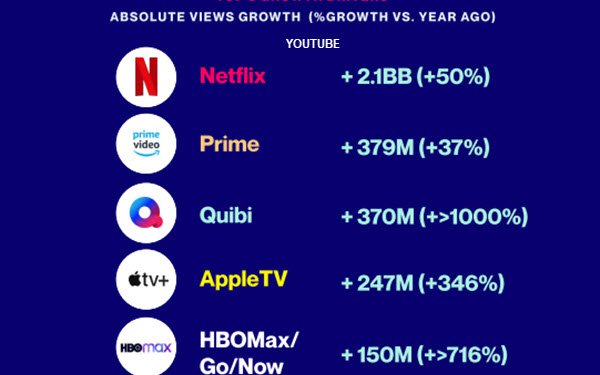 Leading subscriber-driven streaming services have been increasing their use of YouTube and Facebook as promotional platforms for years now.

But their use of the platforms has amped up as they have sought to capitalize on sheltering-at-home consumers’ expanded streaming time, according to data in a new report by social video analytics platform Tubular Labs.

The services that showed the largest growth in total YouTube views — owned and earned — during this year’s first half, as compared to same period in 2019, are shown above. (Note that Quibi and HBO Max had not been launched as of last year’s first half — the former launched on April 6 and the latter on May 27 of this year — although the report seems to imply that they were using YouTube for promotion to some degree a year prior to their launches.)

And here are the services that showed the largest growth in total Facebook views during this year’s first half versus the year-ago half (in this case, Disney+ as well as HBO Max were presumably doing pre-launch promotion): 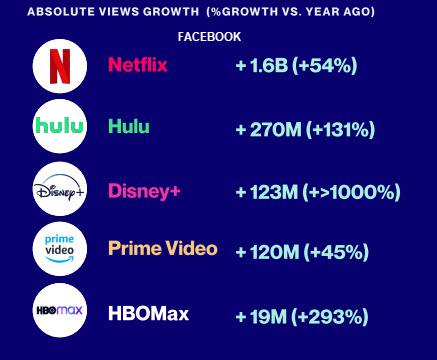 Most interestingly, the report sheds light on what formats some of the SVODs are using on the two social platforms, based on year-to-date data through May.

As you can see, on YouTube, Netflix and Amazon Prime Video are using a similar mix of trailers with some music videos, shoulder content, and either snippets from comedians’ shows (e.g., the “Netflix is a Joke” video series) or compilations.

Disney+, in contrast, has been relying heavily on compilations — not a surprising choice, given the iconic nature and instant-recognition factor of many of the family titles in its huge library.

Quibi, on the other hand, has been running mostly commercials, with some trailers, perhaps reflecting the need to clarify its brand-new, short-form (and originally mobile-only) concept over focusing on content, at this stage.

As with YouTube, Disney has a big compilations component.

Netflix and Hulu both mix in significant scenes from shows, and some shoulder content. And Amazon shows the largest number of music/dance scenes among these four.