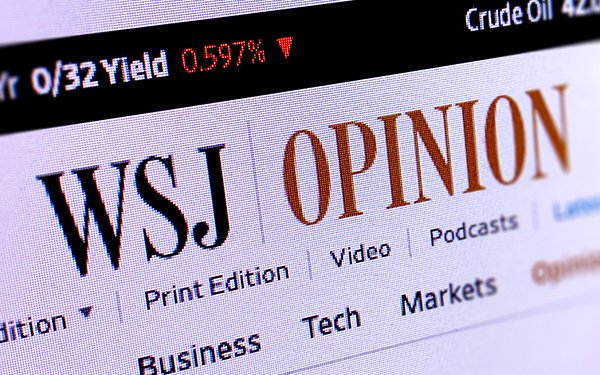 Nearly 300 journalists and other employees at The Wall Street Journaland Dow Jones are calling for more separation between the paper’s news and opinion content online, and for more scrutiny from the opinion section.

The staffers sent a letter to Dow Jones CEO-Journal publisher Almar Latour on Tuesday, expressing their dissatisfaction with the opinion section, according to reporting from the paper.

“Opinion’s lack of fact-checking and transparency, and its apparent disregard for evidence, undermine our readers’ trust and our ability to gain credibility with sources," it said.

The letter cited a recent op-ed by Vice President Mike Pence about COVID-19 infections that required a correction, and an article titled “The Myth of Systemic Police Racism.”

The employees asked for opinion pieces to be better labeled. “WSJ journalists should not be reprimanded for writing about errors published in Opinion, whether we make those observations in our articles, on social media, or elsewhere.”

Readers often aren't aware of the separation between a newspaper's opinion section and news department, which are kept apart to ensure reporting remains independent.

The letter suggests adding the line “The Wall Street Journal’s Opinion pages are independent of its newsroom" to opinion pieces published online, as well as creating a separate "Most Popular Articles" and "Recommended Videos" lists for opinion articles.

"We are proud that we separate news and opinion at The Wall Street Journal and remain deeply committed to fact-based and clearly labeled reporting and opinion writing…" Latour stated in a response to the letter, according to the Journal. "Our readership today is bigger than ever, and our opinion and news teams are crucial to that success.”

The Journal’s editorial page operations have been overseen by Paul Gigot since 2001. The news staff is led by editor in chief Matt Murray, who was copied on the letter.

Last month, New York Times editorial page editor James Bennet resigned after widespread outrage following his decision to publish an op-ed by Sen. Tom Cotton (R-Arkansas) arguing for the need to send in federal troops to retaliate against rioters in the U.S.