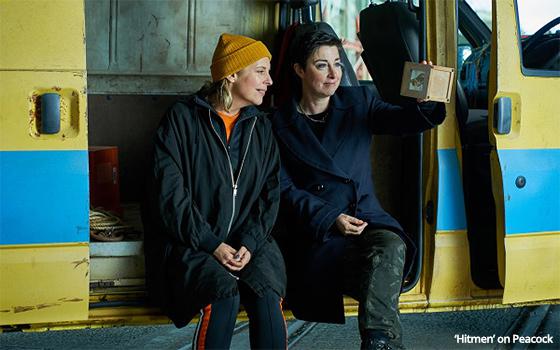 If NBCU’s Peacock streaming service continues to scoop up so many TV shows imported from England, then the big loser will be PBS, which will then have no shows.

The latest British-accent show on Peacock is this new half-hour comedy called “Hitmen” about two assassins-for-hire who happen to be women.

Premiering on the streaming service this coming Thursday, the stars of the show are Mel Giedroyc (photo, above left) and Sue Perkins (right), otherwise known in the U.K. as the comedy team of Mel and Sue.

If they are known to anyone in the U.S., it is because of “The Great British Baking Show,” seen here on PBS, on which they were co-hosts.

So now, these two British women made famous in America by PBS are coming to Peacock with a semi-new comedy series -- semi-new because it already aired earlier this year on British television.

A review on TheGuardian.com from March 25 carried a headline I wish I had thought of: “Hitmen review – Mel and Sue swap glazed buns for silenced guns.”

There may be no glazed buns in “Hitmen” (that I know of), but in the episode I previewed, there was a birthday cake.

This was because the two hit-gals were trying to figure out how to celebrate Sue's birthday on a day when they were also busy kidnaping a potential victim and awaiting word from their unseen boss on whether or not he wanted this man killed.

Thus, you have a very-modern TV comedy in which the mundane trivia of everyday life rubs up uncomfortably with the committing of murder.

And that's the show. In this particular birthday episode, the two were seen sitting around and waiting for this boss's phone call -- all the while discussing their plans for marking Sue's birthday later that evening.

If you are forming the impression from that description that nothing much happens in “Hitmen,” then you would be correct.

This is another in a growing list of TV comedies that are styled this way. They are more “sarcasm-comedies” than “situation-comedies.”

One stellar example of these is the aptly named “No Activity” on CBS All Access -- a show on which there is literally little or no activity other than a couple of cops on stakeout talking.

Some people enjoy these kinds of comedies. Otherwise, producers would not continue to make them, and TV networks and streaming services would cease ordering them.

Whether “Hitmen” will serve as a viewership or subscription driver for Peacock is anybody’s guess.

Let the record show that “Hitmen” is the fourth new Peacock series reviewed here since the service’s launch on July 15. The others were the dramas “Brave New World” and “Capture,” and the comedy called “Intelligence.”

All were made in the U.K. -- not that there is anything wrong with that.