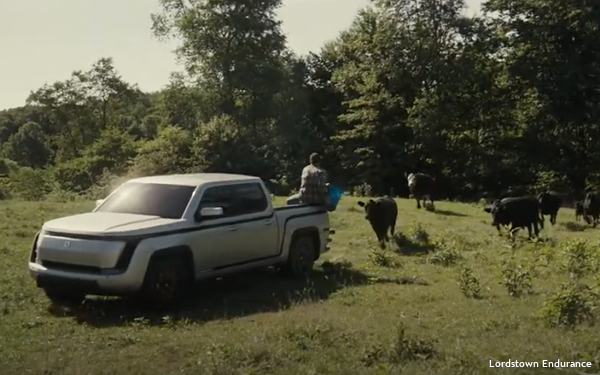 This is turning into a big week for electric vehicles.

Already on the calendar for Thursday is Cadillac’s online reveal of the Lyriq, the first in an upcoming portfolio of battery-electric luxury vehicles from the carmaker.

The Lyriq teaser video created by InVnt has a similar feeling to the poetic introduction that Spike Lee gave the new 2021 Escalade SUV back in February, captured here in “Anthem.”

Cadillac announced  in 2019 it would spearhead General Motors’ shift to an all-electric future and released the first images of a crossover built on GM’s next-generation battery electric architecture.

Lordstown seems to be the epicenter of electric vehicle activity as of late. It is also home to Lordstown Motors Corp., which purchased the former General Motors manufacturing plant there in November.

Lordstown Motors and DiamondPeak Holdings Corp. announced today they have entered into a definitive agreement for a business combination that would result in Lordstown becoming a publicly listed company.

Although its vehicles won’t go on sale until the second half of 2021, the company is wasting no time in beginning its marketing. It has a YouTube channel that includes a 70-second video introducing the Endurance full-size electric pickup truck, designed to serve the U.S. commercial fleet market.

The company has yet to hire a CMO and the video was created by a collection of creatives, not an agency. The group includes Paul Theodoroff, a freelance cinematographer and director of photography at Iconic Talent Agency in Los Angeles and Shelby Ross, an executive producer at Sibling Rivalry Studio in New York.

The video shows the truck being used in a number of hauling activities to show off its capabilities.

“This is a hard-working truck for hard-working people,” says Steve Burns, founder and chief executive officer of Lordstown Motors, during another video, this time revealing the merger.

The truck will deliver the equivalent of 75 miles per gallon. It has been engineered and priced to appeal to companies in manufacturing, contracting, utilities, transportation and delivery and agriculture.

Since its unveiling just over a month ago, the Endurance has been met with enthusiastic support and has received more than 27,000 pre-orders for the vehicle representing over $1.4 billion of potential revenue, Burns says.

If that’s not enough electric truck news for you, GMC announced last week that its all-electric Hummer will be revealed later this fall and will begin production in fall 2021. The automaker will tout the return of the Hummer with a Super Bowl ad featuring NBA star LeBron James. It'll be interesting to see what they do with marketing going forward.