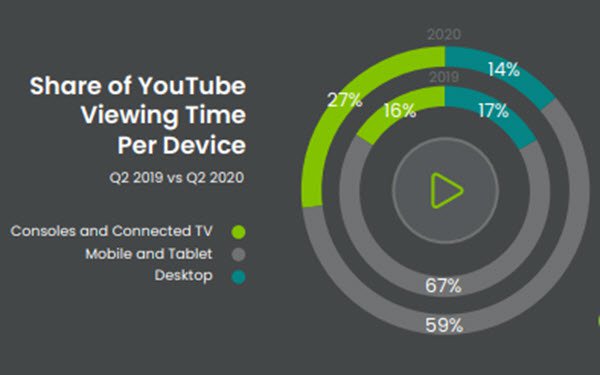 Streaming video ad attempts in the second quarter declined 28% globally and 22% in the U.S. as compared to this year’s first quarter, according to Conviva’s just-released “State of Streaming” report for the period.

Ad attempts are the number of times ads were called from the server to appear on a streaming or connected TV program.

Viewing time-spent on streaming and connected-devices continued robust growth in the period: Up 63% globally and 57% in the U.S. versus last year’s second quarter.

However, growth rates in May and June slowed compared to their height in April, when shelter-in place orders drove streaming viewing up 81% compared to April 2019.

While advertising demand dropped, partly due to a lack of sports, streaming ads saw significant improvements in overall quality.

Viewers spent 38% less time waiting for an ad to start in Q2 as compared to Q1. As a result, pre-ad viewer-initiated exits dropped 22%. Ad picture quality also improved, with bitrate up 53%.

But despite quality improvements, nearly 45% of ads represented missed opportunities — meaning ads not filled or not played as intended. The most common advertising issue continues to be the lack of demand as publishers try to fill ad slots, but no relevant ad is available.

“Shelter-in-place mandates skyrocketed streaming viewership in April, led by Europe, which saw a 174% increase year over year,” said Bill Demas, CEO, Conviva. “Unfortunately, advertising moved in the opposite direction, with global demand significantly reduced due to COVID-19. We expect advertising to bounce back in the coming quarters as the industry and viewers acclimate to a ‘new normal’ including streaming being part of the everyday routine.”

Also bolstering television viewing were connected TV devices (Roku, Amazon Fire TV and others), which saw a 61% increase in YoY time spent, and game consoles, which saw a 55% increase.

Data for Conviva’s report is collected primarily from its sensor technology embedded in 3 billion streaming video applications, which measure more than 500 million unique viewers and 150 billion streams per year and 1.5 trillion real-time transactions per day across more than 180 countries. Year-over-year comparisons were normalized at the customer level for accurate representations of industry growth. The social media data are based on an analysis of data from 1,200-plus accounts, more than 5 million posts, and more than 7 billion engagements across Facebook, Twitter, Instagram and YouTube.