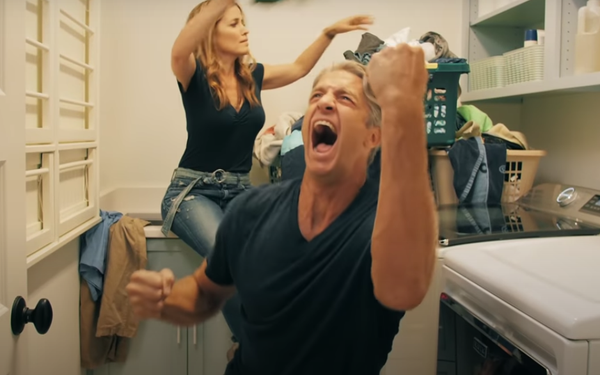 It's probably hard to write a song about a washing machine that's memorable in a good way, but a new Maytag-sponsored video accomplishes that and has become something of a viral sensation.

“Mystery Stain” has been seen 1.5 million times in a week. This is good advertising indeed for Maytag, which uses the video to show off its Extra Power Button that it debuted a year ago. Different stains require different temperatures, and the Extra Power feature takes away the guesswork.

Maytag evidently thinks it needs more attention -- and maybe even a music video.

The Holderness family, which made “Mystery Stain,” has produced hundreds of videos since 2013, documenting real-life hassles for their YouTube channel and other social media. They have gained a following because Holderness videos and song parodies usually avoid the kind of dreck that most things combining “family” and “video” usually turn into. These are actually funny.

In the ad, real-life husband Penn and wife Kim sing about the Maytag washer and its stain-removing power -- and with two kids, they've got a lot.

“Well, the hamper is overflowed,
We're gonna have to do like five more loads.
Summers are so messy, plus it's raining...
We need to get the kids outside,
She rode through a puddle on a big bike ride.
Her shirt looks like a Jackson Pollock painting.”

The Maytag pitch is subtle enough. In fact, the most blatant plug is when Holderness sings the required disclaimer revealing it's a paid ad -- with his young son, dressed in a suit and fake mustache, acting as the corporate lawyer overlooking the signature.

“We think we have a cheeky tone and this fits with that,” said Allison Gillespie, the senior brand manager for Maytag.

Gillespie and the company are appropriately downcast about the COVID-19 pandemic, but she does admit that as people stay home more, “there's more cleaning and washing. There are more stains."

So a new washer is not such a faraway thought, particularly for some who got a stimulus check and decided to do some stimulating. “We see demand growing,” she said.

The video stoked that fire. Maytag's early research suggests the videos are hitting consumers who are in the market too. The brand leaned on Ketchum for the earned media and influencer strategy for Maytag brand. The agency also identifies influencers for clients.

Gillespie says Penn wrote the song with minimal influence from anybody.

“What we're seeing from the comments is that not only did people like the ad, they thought it was great that we were supporting the Holdernesses,” she said.

The Raleigh, North Carolina couple -- both former TV journalists -- and their two children, form a tight ensemble and have a sizable following, including 3.3 million followers and 465 million views over the last two years on Facebook, and over a half million YouTube subscribers.

Most of their videos aren’t sponsored but they have done others, for Kleenex, Hoover, Samsung, Hasbro and HP among others.

"I think it's cool that you have sponsors,” commented one YouTube viewer after seeing the Maytag video. “You deserve it. You make my day. You're cheaper than a therapist.”