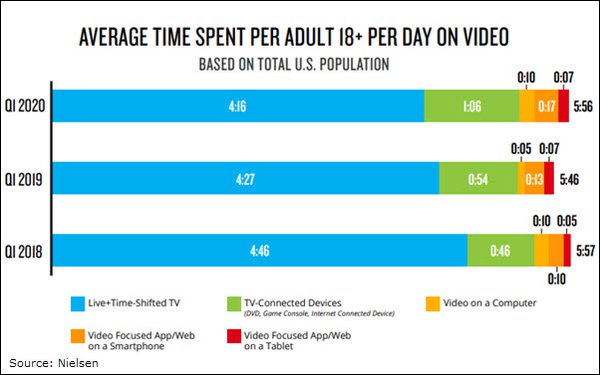 To no one’s surprise, Nielsen’s latest Total Audience Report confirms a marked acceleration in streaming activity in this year’s first half.

Notably, in Q2, streaming accounted for 25% of all television minutes viewed, up from just 19% in 2019’s fourth quarter. (See news item for more on Q2 streaming video consumption by brands and demographics.)

The report also includes first-quarter media consumption trends by platform — which document the growth of time on connected devices and decline in time spent watching live and time-shifted TV. 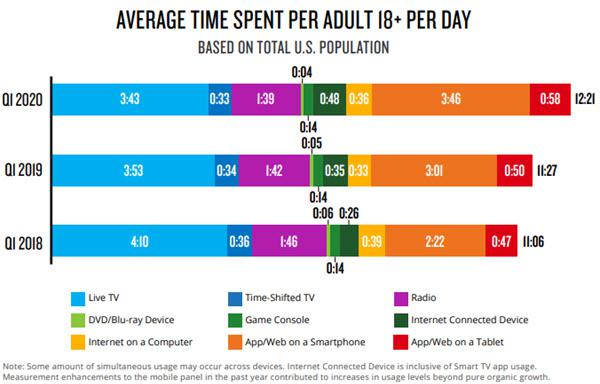 Among U.S. adults, average daily time spent consuming all types of content on internet-connected devices reached 48 minutes in the first quarter. (Internet-connected devices are defined here as those connected to a TV to stream content, such as Apple TV, Roku, Google Chromecast, Amazon Fire TV, smartphones, computers/laptops, and also include smart TV apps.)

Time on game consoles has stalled, averaging 14 minutes per day in each of the past three first quarters.

Meanwhile, daily live TV time has dropped by 27 minutes since the first quarter of 2018 (including 10 minutes over the past year), and time-shifted TV has declined by 3 minutes over those two years.

Looking at average per-day consumption of video only (chart at top of page), time spent on TV-connected devices (smart TVs, game consoles and DVDs) now exceeds an hour (1:06), having grown by 20 minutes since Q1 2018, including 12 minutes over the past year.

Video consumption on tablets was flat over the past year, at 7 minutes, though up by 2 minutes since 2018.

Video time on smartphones is up 7 minutes over the two years, including 4 in the past year.

No doubt reflecting the sudden, massive shift to work-at-home late in this year’s first quarter, video time on computers bounced back up to its 2018 level of 10 minutes per day, from just 5 minutes a year ago. 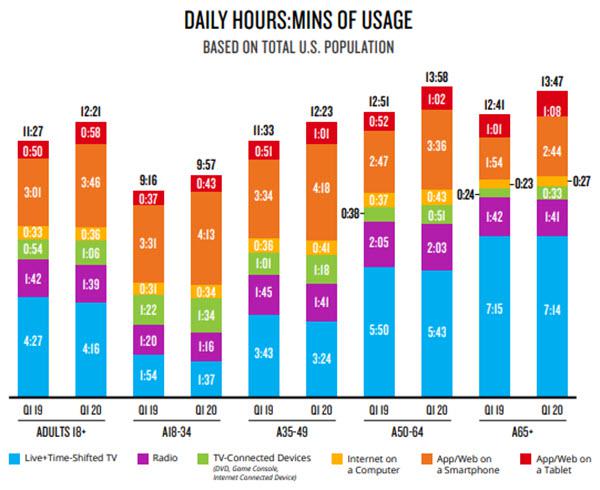 Looking at patterns by age, all groups saw time-spent on TV-connected devices grow by 1 percentage point year-over-year, with the exception of those 65 and older, which was flat at 3% of daily time. 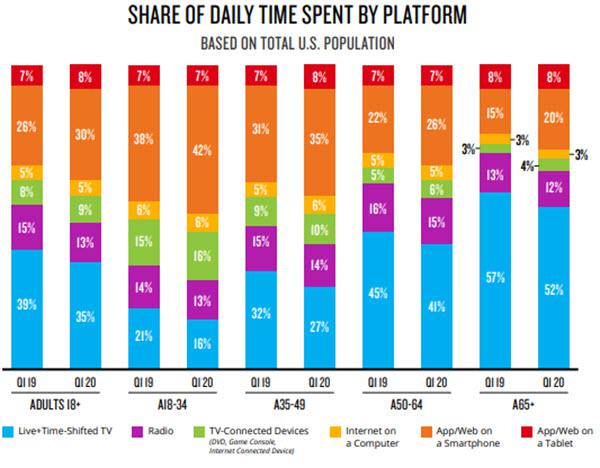 As for weekly reach in Q1, internet-connected devices had a 49% reach overall among U.S. users 18 and older — up 7% year-over-year.