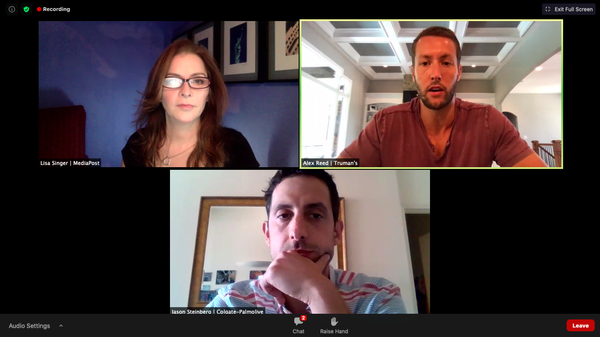 The pandemic has been good to some companies. Not that they wouldn't trade success for a COVID-free world, but, hey, it stands to reason that a company that sells cleaning supplies and one that sells health products, both directly to consumers, would be sought after.

Alex Reed, CMO at cleaning product company Truman's (top right), kicked things off in a panel discussion at Tuesday's Brand Insider Summit CPG. "We were fortunate that we already had a remote work force and a relevant product," he said. The biggest shock when COVID hit was getting bumped from manufacturing timelines while being locked into media commitments. "It was like a cruise ship trying to steer sharply at the last minute," he said.

Truman's was also about to launch a new product, so it doubled down on customer communications, being proactive and updating customer subscriptions. As it turns out, 60% of revenue in Q2 was from the existing customer base. "We made sure our website effectively communicated that subscriptions were flexible."

One thing they couldn't afford to advertise was that if customers canceled because they were economically impacted, Truman's sent them free product. Reed called it "one small thing to help out."

That product launch was ultimately successful because the D2C brand looks at its primary data source -- social media, email, web chats -- and tags each conversation. Then, looking six months ahead, it ranks product development efforts, leading with the biggest marketing opportunities and what customers say they want. "We rig the game," Reed said. "We knew we would be successful because we were hearing about high demand."

People don't expect businesses to just stop what they're doing, as he noted, but there remained the issue of being tasteful at a crucial time. "We looked at insuring our messaging was not opportunistic." But Truman's did take advantage of opportunities with paid social media, which he called "the workhorse of a lot of D2Cs in gaining customers efficiently. It was a smart time to double down, or at least to stay the course."

Fellow panelist Jason Steinberg, Global Direct to Consumer (D2C) at Colgate-Palmolive, noted that most of the unit's SKUs are a home teeth-whitening device and an AR kids toothbrush, products "perfect for the beginning of COVID. The challenge was how to dial up the at-home component of our messaging. To push when everyone else was pulling back was a challenge."

Like Reed, Steinberg spoke about reaching out to customers with subscription plans and offering them a chance to pause, cancel or return a product. This "we're there for you" went a long way, he said.

Just last week, Colgate launched Hum, a smart electric toothbrush that was rushed to market to address the fact that many people are avoiding going to the dentist and are looking for alternatives. The toothbrush connects to an app and gives feedback to the user.