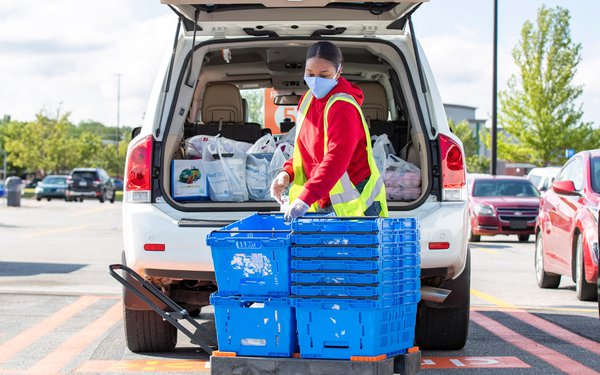 Walmart, based in Bentonville, Arkansas, says revenue climbed 5.6% to $137.7 billion on a currency-adjusted basis. Comparable sales in the U.S. jumped 9.3%, powered by gains in general merchandise and food, with Americans spending $93.3 billion. And ecommerce sales soared 97%, with strength in all channels. Operating income rose 8.5%, to $6.1 billion.

The results show just how many ways Walmart has gained from the COVID-19 crisis. General merchandise sales benefited from the use of government stimulus checks. Food sales advanced in the high single digits, with big advances in household chemicals and paper goods. Pickup and delivery services keep hitting continued all-time high sales volumes.

Another indication of shifting shopping patterns comes from the company’s Sam’s Club division. There, quarterly growth in membership income hit a five-year high, with new members increasing over 60%.

Walmart initially planned to launch Walmart+, its subscription service that will rival Amazon Prime, in July, but has pushed back that debut.

The TABS Analytics report says some companies, including Fresh Direct, NetGrocer and Peapod, saw transactions increase up to 140%, with Walmart retaining about 30% of sales. Amazon’s share dropped more than five points to 27%, while Target’s declined to 11%.

Still, retailers have a long way to go before America is really sold on online grocery options, according to the report. Overall, the increase in ecommerce grocery sales is 15% year over year — a smaller gain than many predicted. Existing buyers made more frequent purchases, and smaller grocery chains experienced massive surges.

“Given the focus on online shopping as the nation navigated stay-at-home orders and quarantines during the COVID-19 crisis, we expected online grocery to see a massive upswing this year,” says Kurt Jetta, executive chairman and founder of TABS Analytics, in the report.

And with much of that growth coming from existing buyers, he writes that “it has become even clearer that this channel will never have the scale necessary to be profitable with the current business model. New, creative approaches are needed to address pricing and streamline the supply chain.”

The analytics firm, based in Shelton, Connecticut, says the report is based on 1,000 adults, analyzing 15 categories.

Addendum: Amazon disagrees with the TABS study. "The primary conclusion reached in this study is wrong," says an Amazon spokesperson. "We’ve seen online grocery orders more than double in August year-over-year and online grocery sales triple year-over-year based on Q2 earnings results, and it continues to be one of the fastest-growing businesses at Amazon."
ecommerce, food, retail
Next story loading