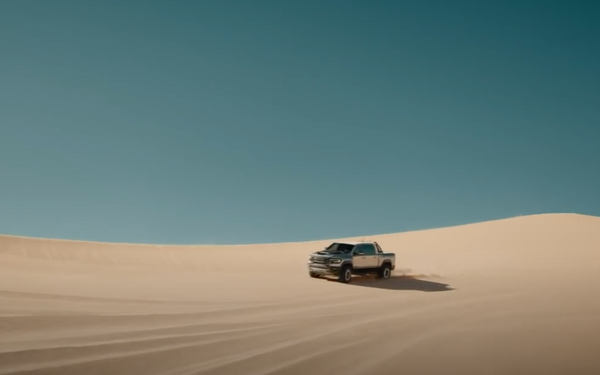 Fiat Chrysler Automobiles is showing off the Ram TRX’s power and capabilities in a long-form video created to reveal the vehicle.

“Sandman,” which runs one minute and 43 seconds, was created by The Richards Group and includes a sensual version of the song “Mr. Sandman.” It includes a new tagline, “The Power Has Shifted.”

Ram Truck's overall theme line for the last several years has been “Built to Serve.”

“It reflects our owners' desires to go above and beyond, and Ram’s mission to serve their needs with best-in-class trucks,” says Chuck Schiller, The Richards Group, creative group head/writer. “And while you don’t see that line on these early TRX pieces, it is very much the foundation of the brand....‘The Power Has Shifted’ signifies how Ram is setting this new standard in the category.”

The TRX was turned loose in the deserts of Utah to demonstrate its speed and off-road capability. The directors, Eric Crossland of Sherpas Cinema, and Renan Ozturk, captured jaw-dropping imagery of the 702 horsepower vehicle, which is the fastest off-road production truck ever made.

The video, which also includes shots of wildlife and other desert imagery juxtaposed with the performance shots cut by ATK PLN editor Chris Collins was complied with COVID-19 restrictions, which added an extra edge to the filmmaking, according to the agency.

“Let the truck do all the talking” was the creative mantra throughout the creation of the social-media content and reveal videos, according to the agency. There are only brief shots of a helmet-clad driver, and the truck is the focus throughout.

“Like any of us, Ram has a range of emotion and sound,” Schiller tells Marketing Daily. “In this case, we think the power and confidence of the TRX are self-evident, and so we simply let the truck speak for itself.

Facebook and Instagram are being used  to support the launch,  including teaser content and “Sandman” post-reveal. YouTube pre-roll will run after the reveal, using feature-focused 15-second ads created with footage captured during the asset shoot.

“As we continue to sustain the momentum of reveal, more assets will be deployed in a strategic manner to continue to build the truck’s desert-racing credibility among off-road enthusiasts, Ram fans, and TRX hand-raisers,” Schiller says. “The next big thing we’re working toward is the launch, set to happen later this year.”

Ram Truck announced that orders for the 2021 Ram 1500 TRX Launch Edition were filled in approximately three hours on Aug. 18. Only 702 -- commemorating the TRX’s barrier-shattering 702-horsepower 6.2-liter supercharged HEMI® V-8 -- of the Launch Edition trucks were offered to U.S. buyers.