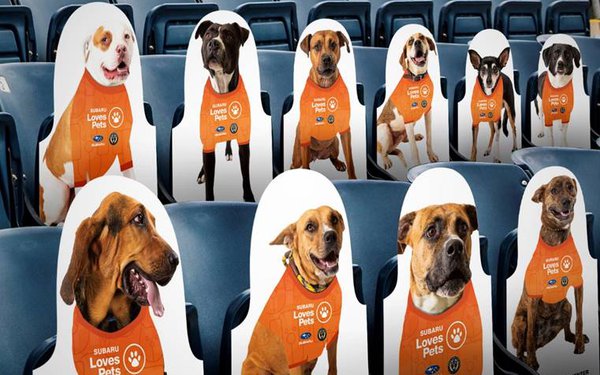 The stadium seating at Subaru Park, home of the Philadelphia Union, will showcase cutouts with images of real, local adoptable dogs.

The cutouts with be in place at all home games in the 2020 season, starting with the first home game Aug. 25, according to Subaru of America.

Inspired by the Union’s  Sons of Ben team supporter group, each “Dogs of Ben” cutout will represent a dog available for adoption in the greater Philadelphia area.

The automaker has a long-standing tradition of using pets in its marketing and supporting local pet adoptions. Subaru partnered with local shelters across the country this past year to bring adoptable dogs to auto shows where they received exposure to the large number of attendees, thus improving their chance for adoption.

“From the onset of our partnership with the Union, we knew we wanted to bring our furry friends out to Subaru Park and bring awareness to adopting shelter pets," he says in a release.

Viewers can spot the Dogs of Ben on partner station PHL17. Those looking to take home a real-life furry Union fan of their own can head to https://www.philadelphiaunion.com/subaru to learn more.

Subaru and the Union joined forces in February, kickstarting a multiyear stadium naming rights partnership that gave the name Subaru Park to the 18,500-seat sports and events destination and home of the Union. The partnership includes supporting the greater Philadelphia community with charitable programs.