Belichick Does His First TV Commercial Work For Subway 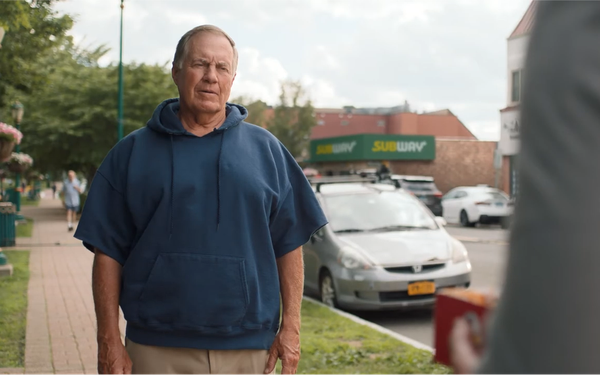 Subway has recruited legendary New England Patriots NFL coach Bill Belichick to take a starring role in its 2020 NFL season-long ad campaign which has been dubbed “Footlong Season.” The campaign was created in collaboration with Subway’s ad agency dentsumcgarrybowen.

The campaign kicks off today with a TV spot featuring the taciturn and press-averse Belichick. The company says it’s the first time the six-time Super Bowl winning coach has agreed to participate in a TV commercial.

Other notables starring in this year’s effort include NFL stars (and brothers) J.J., T.J and Derek Watt and NFL Hall of Famer Deion Sanders. In addition to TV the national campaign includes social and digital content.

One of the Belichick ads shows a man carrying a box of fried chicken. He looks up and to his surprise the famous coach is standing right in front of him. Coach B, staring disapprovingly at the chicken, says, “Really?” The man quickly tosses the chicken and says, “You’re right, I should get a Footlong from Subway, that would be better.” With that, Belichick whips out a pair of a scissors and with a few snips renders the man’s jacket sleeveless.

“There,” says Belichick, “now you look better too.” Belichick, as most of football fandom knows, is known for wearing sleeveless hoodies. The spot ends with a buy two get three offer.

A second ad has a little fun with Belichick’s reputation for keeping his poker face on at all times, at least in public. He’s seen sitting outside a Subway, eating a Footlong and looking around unsmiling as the narrator intones enthusiastically, “This is the face of utter glee! Bill is beaming from ear to ear as he enjoys Footlong Season at Subway!”

Subway offered this quote from Belichick: "When Subway reached out, shared the Footlong Season campaign objectives and the ideas for the commercial, I decided the timing was right to have some fun and enjoy some sandwiches.”

Carrie Walsh, Chief Marketing Officer of Subway added, “In our first play as a proud sponsor of the NFL, we’re pairing our game day favorite Footlongs with America’s favorite sport and intercepting football culture with an elite squad of stars to help turn Football Season into Footlong Season.”

Subway was named the NFL’s “official sandwich sponsor” in July.