For #LaborDayOn, Red Wing Reaches Out To The Unemployed 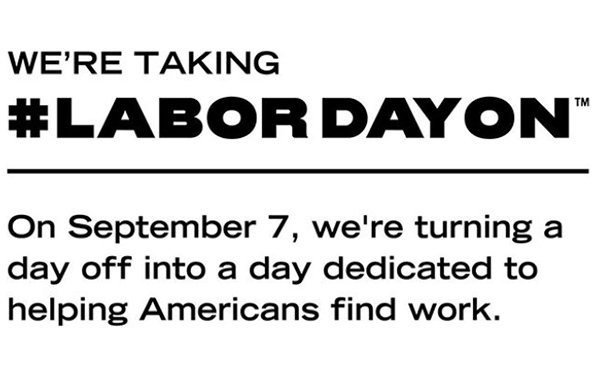 The company, best known for ultra-tough footwear, wants to help America’s 25 million unemployed people get back to work. It is launching a #LaborDayOn campaign, transforming its digital channels and 525 stores into one-day job centers.

“The best brands are the ones that lead and influence culture, and we want to provide a service to our customers in a meaningful way, helping people find jobs,” says Dave Schneider, CMO of the company. “There are 25 million people out of work, and our goal is to connect them with potential employers.”

Red Wing’s core audience are those in the skilled trades, he tells Marketing Daily, who wear their workboots on job sites in 11 different verticals, from manufacturing to electrician. “What we do is help people do their best work,” he says. “But people can’t do that — and they can’t have a day off — when they don’t have a job.”

The effort includes openings at Red Wing, but also job postings from companies like General Mills, Polaris, Toro and Land O’ Lakes. And using the hashtag #LaborDayOn, he says he hopes other companies will use the digital assets it created, which are all un-branded.

“We don’t just want this to be a promotional effort. And yes, we’d like to fill our own open positions. But ultimately, we hope this will grow into something like American Express’ “Think Small” effort, with many companies using #LaborDayOn to fill jobs and get people back to work.”

Ads in The New York Times and other newspapers are publicizing the campaign. In addition to switching stores into job hubs, the company is also transforming the customer-service line, 800-RED-WING, into a job search hotline. It’s swapped out product listings for jobs in a video from Droga5 in New York, which offers clickable links to open positions.