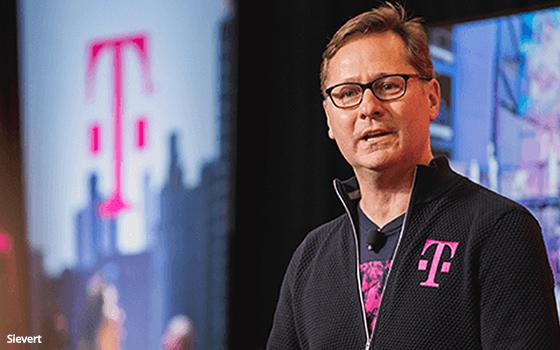 Mike Sievert, T-Mobile’s CEO, is making headlines by privately warning Democrats that being associated with extreme-sounding rhetoric could be enough to get President Trump re-elected.

“Democrats/Liberals, if we want to LOSE THIS ELECTION, we should keep saying and repeating the phrase ‘Defund the Police’ and associate the phrase with our candidates,” he wrote last week on his locked Facebook account that only some friends can see -- a warning nonetheless reported by Politico.

“This phrase is a sure fire way to hand Donald Trump and many R’s in Congress another term,”  Sievert continued.

But it’s unusual for corporate executives to take forceful, personal stands for or against candidates, lest they or their companies and shareholders suffer the consequences.

The Planet Fitness health club chain suffered blowback last year when it was disclosed that Chris Rondeau, the CEO, contributed to Trump’s 2016 election campaign and other conservative causes or politicians.

Some businesses got black eyes because they advertised on some Fox News shows, like ones hosted by Sean Hannity or Tucker Carlson, or, conversely, because the companies pulled ads from those shows.

Sievert, in fact, tweeted “Bye-bye Tucker Carlson!” and added the hashtag Black Lives Matter after Carlson in June seemed to warn that “they will come for you” on his program. Fox News insisted Carlson was referring to Democrat leaders, not black protesters.

In his Facebook post, according to Politico, Sievert also wrote: “[I]f the mantra becomes ‘Defund the Police’ or worse, if we start to riot and tear down buildings or incite violence in response, the other guy wins. THE OTHER GUY WINS.”

He added: “And the changes we want, and demand, won’t come about anytime soon."

In Trump’s re-election ads and speeches, the President often says Biden wants to defund the police, when in fact Biden had campaigned for more accountability and policing reform.

T-Mobile, more officially, has a reputation for blasting away at targets without much restraint.

It has referred to its two bigger rivals, Verizon and AT&T wireless, as “Dumb and Dumber,” and chided both companies for what it has called their deceptive ads.

Other ads and social media tweets lampooned AT&T for its 5G-E service that, in fact, was just a version of 4G service.

T-Mobile also has been accused of some underhanded tactics.

The company was criticized because its executives, including Sievert, spent $195,000 for over 52 stays at the expensive Trump International Hotel in Washington while the company was arguing with government regulators over approving T-Mobile’s $26 billion merger with Sprint.