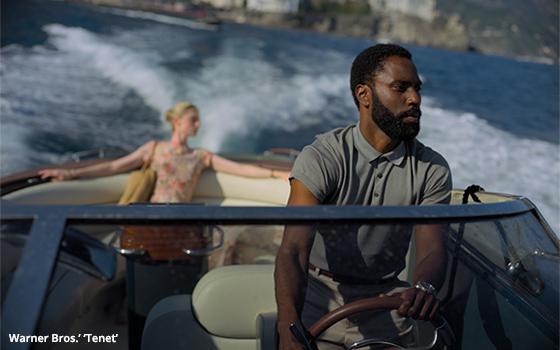 Almost three-quarters of U.S. movie theaters were opened for the Labor Day holiday weekend, with the total movie box-office earning $28.1 million -- 76% below the Labor Day weekend total a year ago, according to IMDb Box Office Mojo.

This comes after six months of theater closures due to the COVID-19 pandemic.

The return of big movies this year came with the Warner Bros. highly touted thriller “Tenet” which posted $20.2 million in revenue for the four-day holiday weekend. A year ago on Labor Day weekend, “Angel Has Fallen” was the best performer, taking in $15.4 million.

This Labor Day weekend had 17 movie releases versus 82 a year ago, when total box-office revenue totaled $120.8 million. The $28.1 million total was up from the $12.5 million the previous week.

The opening of “Tenet” was the biggest wide-release Hollywood weekend since the March 6-8 weekend, when Walt Disney Studios’ animated “Onward” pulled in $39.1 million on the weekend.

Three states -- New York, North Carolina and New Mexico --  had movie theaters that remain fully closed. One of the biggest states, California, had a partial opening, with theaters now resuming operation in San Diego, for example.

“Tenet” pulled an additional $126 million internationally through its first two weekends of release, now with a global total of $146.2 million.