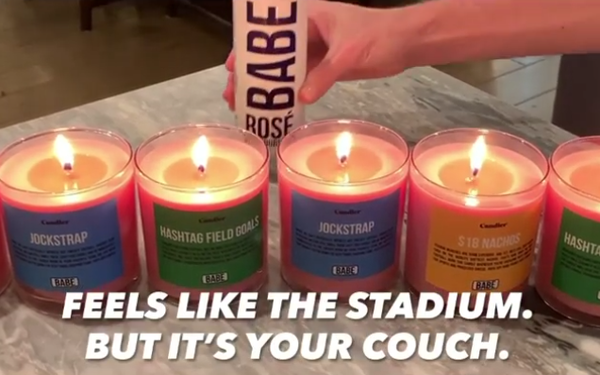 It’s football season -- and around the country, that means it’s time to stock up on canned wine and scented candles.

The one that no doubt will get the most attention, one way or the other, is the “Jock Strap” candle, with scents of musk and men’s deodorant.  Yep, that’s the real name.

The other two are “Hashtag Field Goals,” with the scent of freshly cut grass, and a candle that salutes overpriced stadium food called “$18 Nachos,” with the aroma of nacho cheese. (Babe’s press release refers to the Mexican snack, as prepared at sports venues, as “the world’s shittiest nachos”).

Babe is available as rosé, pinot grigio and red.

For this marketing event, Babe is using the phrase “Smells Like Team Spirit,” a clever two-letter alteration of the title of Nirvana’s 1991 hit, “Smells Like Teen Spirit.”

Chelsea Phillips, Babe’s general manager, said in a statement, “As football season kicks off without fans in the stands, we saw an opportunity to enhance the at-home game day experience through some pretty unique scents that’ll make you feel like you’re really there.”

Sportscaster Erin Andrews, who has her own line of sports apparel, appears in an Instagram ad sampling the candles in a living room.

Some NFL stadiums will allow fans in the stands at the beginning of the season, and some won’t. Even those that will plan to let in only a few thousand spectators. Those plans may change as the season goes on.

Babe probably wishes there were a lot more fans at the stadiums, instead of pitching itself to fans at home.  Last year, it became the “official wine sponsor of the NFL” and it was sold in 12 NFL stadiums, giving Babe a chance to really grow.

This year it planned major signage at MLB and NFL venues. Anheuser-Busch also planned major stadium signage for its new Bud LIght Seltzer before the pandemic gave the company reason to rethink its plans.

Anheuser-Busch bought a minority interest in Babe in 2018 and fully acquired it a year later. Phillips told Marketing Daily in June the brand had already sold 7.6 times more cans of wine than it had the year before.