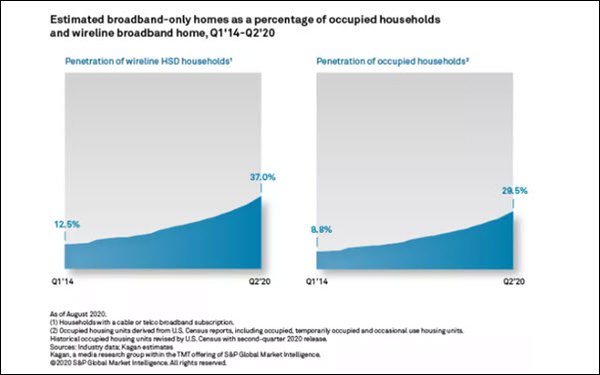 As of this year’s second quarter, 37% of wireline broadband homes did not subscribe to any linear pay-TV service, reports S&P Global Market Intelligence’s Kagan unit.

In addition, nearly 30% of all occupied U.S. homes did not subscribe to a multichannel video programming distributor (MVPD) service as of Q2, Kagan found.

In this year’s first half, the growth rate for broadband-only homes was 80% higher than during first-half 2019. (Kagan does not include homes that rely on wireless-delivered broadband in "broadband-only" homes.)

“Given the economic headwinds of the first half, U.S. households likely were looking to cut back on discretionary spending, including entertainment,” Kagan senior research analyst Tony Lenoir wrote in a blog post.