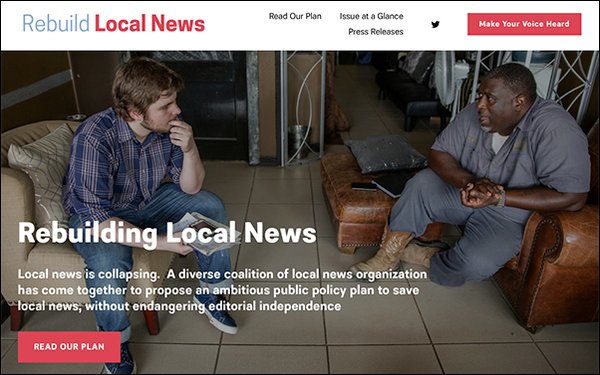 Since 2005, 2,100 newspapers have closed, almost one-quarter of the 9,000 newspapers that were being published in 2004, according to a report from the Hussman School of Journalism and Media at the University of North Carolina, Chapel Hill.

Can newspapers be saved?

The Rebuild Local News coalition has an ambitious plan.

The organization comprises a large group — including but not limited to the Institute for Nonprofit News, the National Newspaper Association, Local Independent Online News, Black publishers, Hispanic publishers, the American Journalism Project, The Lenfest Institute and PEN/America.

RLN is not turning to government for a bailout; it sees it as an ally. The gist of the plan is for Americans to step up and help save local news, which is essential to ensure communities have a watchdog to fight corruption and waste.

One bipartisan idea is a $250 refundable tax credit used to buy local news subscriptions or as a donation to a local nonprofit news endeavor.

The coalition’s plan would dramatically increase the number of local reporters — probably double the number. Yet it would do it without creating a government agency to mete out grants. Similarly, local businesses would earn a tax credit — $2,500-$5,000 — by supporting local press, such as buying local ads.

There are tax incentives proposes for hiring, as well.

Thinking bigger, RLN proposes transferring hundreds of newspapers into local nonprofit groups, with a twist. It proposes allowing them to sell ads and create revenue-generating projects — without threatening their IRS nonprofit status. There would be a bigger charitable deduction for owners who complied, accompanied by new anti-trust policies that would slow or ideally stop media mergers that strip towns and staffers of both coverage and jobs.

As Steve Waldman, president of Report for America and coordinator to the Rebuild Local News coalition, wrote in Poynter: "Solving the local news crisis will require much more than enacting these proposals. Foundations and individual donors will need to significantly increase their support, and the commercial sector will need to continue to innovate.”