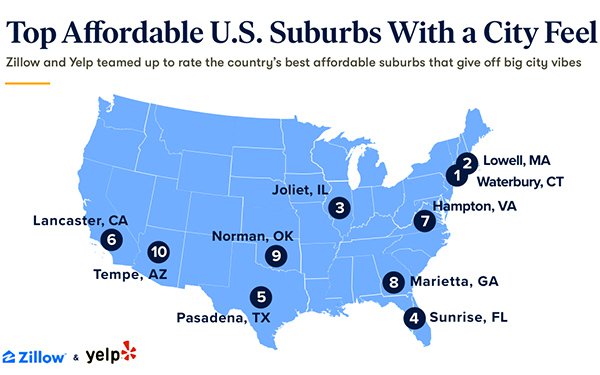 People are searching for new places to live as many have an option to now work from home.

Restaurants, nightlife, museums and sports venues have long drawn people in the United States to live in large cities, but buyers now seek a new balance of indoor and outdoor space while still maintaining that big-city feel.

Yelp and Zillow have released a Cityness Index that identifies the U.S. suburbs with the best balance.

The Cityness Index combines data from Zillow and Yelp to identify relatively affordable areas near major metros with amenities that give the suburbs the feel of big-city living.

Metrics include home values compared with the nearest big cities and to the country, housing availability, mix and diversity of businesses such as restaurants, and arts.

The data also includes check-ins and reviews on Yelp.

There were four individual Yelp indicators evaluated for each suburb to determine its “cityness.”

From the criteria, the companies used assigned a Cityness Index score to hundreds of suburbs across the country and identified the highest scores in 50 of the largest U.S. metros. Waterbury, Connecticut -- near New Haven and Hartford -- topped the list, beating out Lowell, Massachusetts for the top spot.

Yelp saw an increase in searches and quotes for categories like movers, packing services and mortgage lenders increase in major metro areas, compared with the same time period last year.

In fact, Yelp data shows the number of quotes requested for movers recently increased 34% in San Francisco, 22% in New York and 6% in Los Angeles