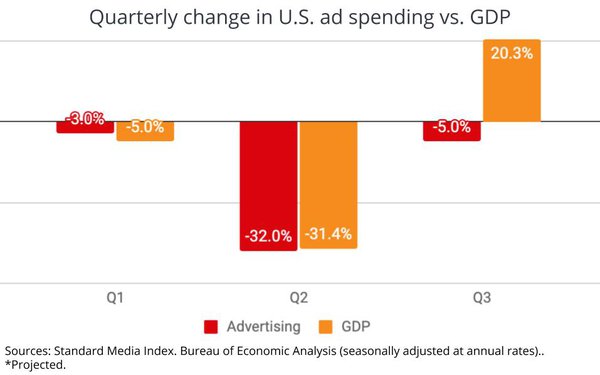 U.S. ad spending lagged the erosion of the U.S. economy going in and coming out of the 2020 recession, according to a MediaPost analysis of final quarterly estimates for quarterly ad spending from Standard Media Index and data from the U.S. Bureau of Economic Analysis.

While the U.S. GDP fell 5% during the first quarter, which included the beginning of the U.S. shutdown related to the COVID-19 pandemic, the ad industry declined only 3%.

By the second quarter, the U.S. ad economy fell slightly faster -- just 0.6 percentage point -- than the 31.4% decline in the GDP.

The BEA will not officially reveal its third-quarter GDP estimate until October 29, but it's expected to expand 20.3%, while the U.S. ad industry declined 5.0%.

The comparison isn't exact, because the BEA utilizes seasonally adjusted estimates based on annual rates, while SMI's data is based on direct comparison with the same quarter a year earlier.

Even so, the data indicate that the U.S. ad economy still reacts based on historical norms, lagging the general economy heading in and coming out of recessions.

An earlier MediaPost analysis based on SMI's U.S. Ad Market Tracker showed different final estimates for each quarter, but was based on simple average calculations for monthly index totals.