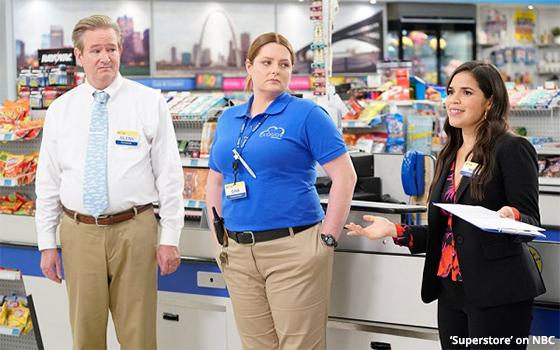 The COVID-19 pandemic is seen from the point of view of a group of fictional big-box store employees in this week’s season premiere of “Superstore” on NBC.

It is the sixth season of this retail-workplace comedy that takes place inside a Walmart-like megastore called Cloud 9.

This store, part of a fictional chain, is located in St. Louis. And like the big-box stores in the real world, Cloud 9 was deemed essential and allowed to stay open.

For those who have followed “Superstore” for five seasons, the most significant aspect of this week's season premiere (airing at 8 p.m. Eastern on Thursday) and the season's second episode a week later is the departure of series star America Ferrera (above photo, right).

She announced late last season that she would not be returning for Season Six. But the onset of COVID-19 last March prevented “Superstore” producers from filming a season finale that may have dealt with her departure.

So, she apparently agreed to return for the first two episodes of the sixth season in which her exit is more than adequately covered.

The story is that her character, store manager Amy Sosa, has accepted a job with the parent corporation in California, and she is preparing to move there with her live-in boyfriend and Cloud 9 co-worker, Jonah (played by Ben Feldman).

But it has been widely reported that Feldman is staying with the show. The writers and producers deal with that dilemma -- her going and him staying -- in next week's Episode Two.

Meanwhile, the first months of the COVID-19 lockdown get a fictional going-over in this week's season premiere as the Cloud 9 working stiffs begin to cope with a situation that goes south quickly.

The episode is arranged in an informal month-by-month chronology. It begins last March as the word “coronavirus” was just beginning to make news. It ends in June with the lockdown in full flower.

By the end of the episode, the store's fearful staff is trying to plan for possible riots and looting stemming from Black Lives Matter protests.

But fear not. Even in the era of COVID, “Superstore” remains a comedy. At one point, Jonah pooh-poohs the potential for violence, and no protests, riots or looting are ever shown. Indeed, none of it ever happens near the store.

In fact, various aspects of the COVID era are played for laughs. Situations rendered here for the sake of prime-time comedy include the mad rush of customers to denude the store of essentials such as toilet paper, and at least one confrontation with a recalcitrant female customer who refuses to wear a mask.

This week's season premiere of “Superstore” provides more evidence that for TV, COVID-19 is simply too big to ignore.