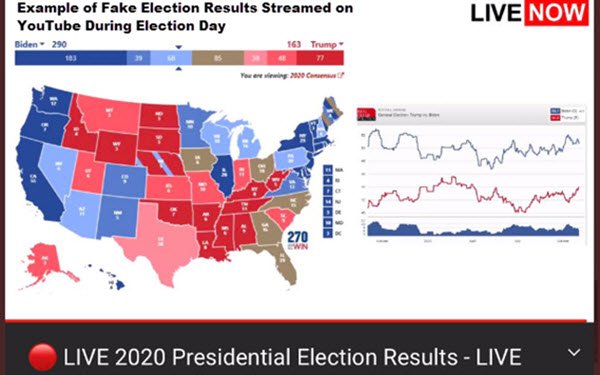 Social media on the whole botched the critical, difficult challenge of dealing with false and premature claims during U.S. presidential election night, handing more ammunition to critics on both ends of the political spectrum.

In perhaps the most egregious example, Google’s YouTube —which is still grappling with fallout from its early 2020 decision to sell its home page masthead to the Trump campaign for the entire election day — yesterday allowed several channels to broadcast fake election results hours before any state’s polls closed.

“Eight videos out of the top 20 videos in the YouTube search results for "LIVE 2020 Presidential Election Results" showed what appeared to be the same fake results graphics that channels were spamming in an effort to get views and, on three of the channels, made money from advertisements that played before the stream via YouTube ad services,” reported Insider, which spotted the fakes and reported them to YouTube.

One of the channels featuring fake election results had more than 1.4 million subscribers, and four of them were verified channels. But none were affiliated with political or news organizations. Rather, “hip-hop and nd music-related channels were found to be usurping outlets like CBS News and NowThis News in YouTube search results.”

After Insider sent YouTube links to three of the fake broadcasts, the platform removed them, citing its policies prohibiting “spam, deceptive practices & scams.”

However, multiple versions of these videos still appeared in the first page of search results on YouTube after the platform said it was taking action, according to Bloomberg.

It is not clear from reports thus far how long the fake results were featured on YouTube or how many people were exposed to them, although the number must at minimum be tens of thousands.

After being alerted to the fake results by Insider and others, YouTube also added banners to the top of search results about election results that stated: "Results may not be final. See the latest on Google," linked to a live counter that showed results were pending.

But consulting Google news wasn’t necessarily a sound move: Before Virginia’s results had been officially called, Google inaccurately claimed that Joe Biden had won the state.

On the positive side of the ledger, both Twitter and Facebook did intervene last night by putting a warning label on a false Trump post claiming voter fraud was underway, according to BBC news. His post: “We are up BIG, but they are trying to STEAL the Election. We will never let them do it. Votes cannot be cast after the Polls are closed!”

However, Facebook and Twitter took different but probably equally confusing actions in implementing — or not implementing — their pre-election announcements that they would work with official, credible election results sources and label any premature claim of victory.

The platform put a warning label on a Trump campaign tweet declaring victory in South Carolina (“Official sources may not have called the race when this was Tweeted”), according to Politico.

Reason: Twitter had declared that it would label any such claim if it was made before at least two of seven news organizations specified by Twitter had called a race. In South Carolina’s case, only one of those sources, the Associated Press, had called the race at that time (although it had been called in Trump’s favor by other trusted sources not on Twitter’s approved list, including The New York Times, The Washington Post, CNN and Politico itself).

Yet, Twitter didn’t put a warning label on a Trump campaign tweet declaring victory in Florida, citing as its reason that the tweet referenced one of Twitter’s approved race callers (@DecisionDeskHQ) as its source.

Facebook, for its part, once again changed its policies as soon as it became expedient to do so.

Mid election night, the platform gave a statement to the Wall Street Journal “clarifying” its declared intention to label premature victory claims, saying the policy “was only ever meant to apply to the overall result of the presidential election not individual states.”

“Facebook hadn't spelled out that detail of the policy, which took on increasing significance late Tuesday as the tight presidential race looked increasingly as if it might come down to the vote in one or two contested states,” writes WSJ, adding that for months ahead of the election, CEO Mark Zuckerberg had said the platform would flag premature claims with an “informational label” noting that votes were still being counted.

Facebook’s policy flip-flop — “announced two hours after the Journal raised questions about some Republicans posting on the platform declaring a Florida victory” — meant it would now “allow either candidate or their prominent supporters to proclaim the winner of battleground states while the outcome is actually in dispute,” explained WSJ.

Alex Stamos, director of the Stanford Internet Observatory and former chief security officer at Facebook, summed up the move this way: “A policy that doesn't apply to individual states is not very useful in a contest that might come down to one state.”